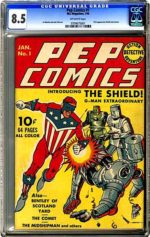 In January 1940, MLJ launched Pep Comics featuring The Shield: America’s 1st Patriotic Comic Book Hero, by writer Harry Shorten (the companies Managing Editor), and artist Irv Novick. The Shield was the cover feature for Pep Comics until, March 1944 when Archie became the dominant feature. The Shield continued as a secondary feature for four more years until his strip was canceled in January 1948. The Shield was initially for all intents and purposes the patriotic version of Superman. In early issues bullets bounce off his chest in Superman-like fashion, he also had super strength and could leap tall buildings in a single bound.

The Shield is Joe Higgins, who suffered from a tragedy as a child when his father, FBI Agent Tom Higgins is killed in an explosion set up by one of his enemies. The dying Tom tells his son about an uncompleted formula he had been working on. The formula was called S.H.I.E.L.D., Sacrum; the spinal center, Heart; the pump of the body, Innervation: the nervous system, Eyes; the power of sight, Lungs; control of respiration, Derma; the skin. Joe goes to college and becomes a chemist. Joe completes his father’s formula. Before he can make use of it and find out who killed his father, the killer comes after Joe. He is beaten and then left at the site of another explosion. Joe goes back to his lab, badly wounded, and applies the formula to his body. He seals himself in a special fibro metallic suit and then lies under “fluoroscopic rays” for 12 hours to allow his body to absorb the chemical. This alters his body and he now has superpowers. The Shield reported to J. Edgar Hoover and the President. 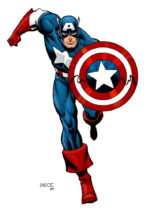 Being the first patriotic hero the Shield predated Joe Simon and Jack Kirby’s Captain America by 15 months. Not only did Captain America steal the patriotic concept from the Shield, he also borrows much of the origin as well. Both heroes initially got their powers through scientific experiments involving a chemical solution. In Captain America’s case, Steve Rogers volunteered to be given a dosage of a special serum by Professor Reinstein. After Reinstein injected Rogers with the serum, Rogers’ frail body became taller and more muscular as the serum caused more muscle tissue and cells to develop, later accounts had the cellular development boosted by exposure to “vita-rays”. The result, Steve Rogers had gained a new body that gave him limited super strength and magnified his vitality and agility.
The comparisons don’t end with the origins and patriotic costumes. After Robin joined Batman, kid sidekick were all the rage in the 40’s. The Shield needed a sidekick too. He was joined by Dusty. Dusty, browed heavily from Robin. Both had first names as the superhero name, both had costumes consisting of short pants, short sleeve shirts with a collar and cape. Dusty first appeared in Pep Comics #11, January 1941, Three months later Timely came up with a kid sidekick for Captain America, Bucky. 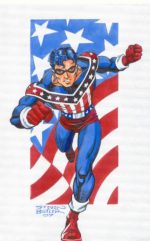 Later MLJ, now called Archie Comics, tried to re-launch the Shield in the fifties, with The Double life of Private Strong in June 1959. This was an update of the Shield in much the same way DC had updated the Flash. Here Joe Simon and Jack Kirby of Captain America fame updated the Shield. Lancelot Strong was a soldier much like Steve Rodgers was but his superpowers, and childhood were a reflection of his Superman roots. Lance was both an orphan with incredible powers and was discovered by a farm couple that raised him as their own. DC complained that this version of the Shield was too close to Superman, which included a costume now in Superman colors. Archie canceled the new Shield title with its second issue. Later Timely, now called Marvel, tried to re-launch Captain America in the fifties, with Captain America’s Weird Tales in October 1949 and then again in 1954 as a fighter of communism. Both the new concepts for the Shield and Captain America failed, as neither was able to recapture the Golden Age magic. 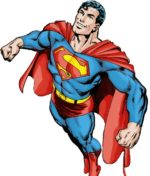 In the sixties, DC re-launched their line of superheroes with great success. Seeing DC’s success Marvel follow suit with a re-launch of their superheroes. Stan Lee teamed up with Captain America co-crater, Jack Kirby, to start the Marvel Age of comics. This included a revival of Captain America in the pages of Avengers #4 in March 1964. This was the Golden Age Captain America in all his World War II glory, completely and totally separated from all his post-war stories.

Over at Archie, the Simon & Kirby, Adventure of the Fly, was still going strong. In May 1964 with Adventure of the Fly #31, the Golden Age MLJ heroes were revived and turned into a team “The Mighty Crusaders”. It was in this group that the third Shield, Bill Higgins first appeared. Bill was the son of Joe Higgins the Golden Age Shield. No one knew that Joe had a son. When one of the Shield’s foes, the Eraser, turned Joe into a stone statue, Bill took his place as the Shield without anyone being the wiser. Bill was a much different Shield then his father. Bill was a hothead as the Shield and was often in conflict with his fellow heroes. In his private life, he was also less heroic. His duties as the Shield interfered with his ability to keep a job and he was looking for work or starting a new job in almost every story. 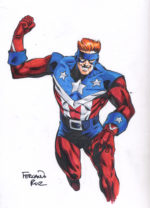 The Bill Higgins, Shield stories were written by Superman co-creator Jerry Siegel, and done in the style of the Batman TV series, with tremendous exaggerations and oversimplifications. Unlike the second Shield, the third Shield had no connection to Superman, except the writer. While the Bill Higgins Shield lasted for several years, in July 1967 with Mighty Comics Presents #48, Bill Higgins ended his career as a Super Hero. Two issues later with Mighty Comics Presents #50, the curtain closed on Archie’s Silver Age Super Heroes completely.

As a side note, Archie tried another revival of both the Joe Higgins Shield and the Lancelot Strong Shield in the 80’s, but the Bill Higgins Shield was never seen again.

To visit Archie Comics on the web go to www.archiecomics.com