From: https://theunspokendecade.com/2021/09/08/the-shield-is-mightier-than-the-sword/
By Jason Lee Miller 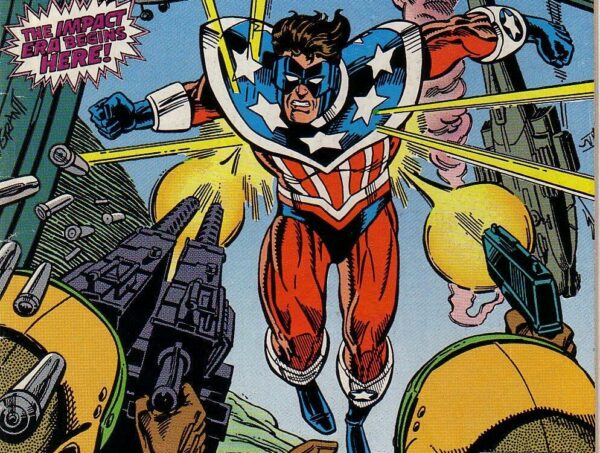 I know, right? It’s unbelievable. I’m back with another article in the same month! I’m not even spouting off some wild excuse as to my tardiness! Will wonders never cease? Why, you ask? Well, it’s because I truthfully felt compelled to. No. I took all of the appropriate medications, with the proper doses. (At least I think I did.) I really did feel like I was supposed to do this somehow. That’s when the realization hit me, this will soon be the anniversary of my stepfather’s death. My subconscious must have been letting me know. You see, my spepdad and the character known as the Shield are synonymous to me.

Why? Because he was the one who bought me my first Impact comic, the Shield action figure, and even purchased every other single issue from the Impact line for me. And when he was taken from this world, all of these things meant even more to me. He protected me, cared for me, and made me believe in a fatherly love that I until then had never known. He was my personal superhero. In my heart, he was the Shield. Not a symbol of patriotism, but a symbol to me of what a man should aspire to be. (Wipe your tears, Unspokenites. You still have an article to read.) 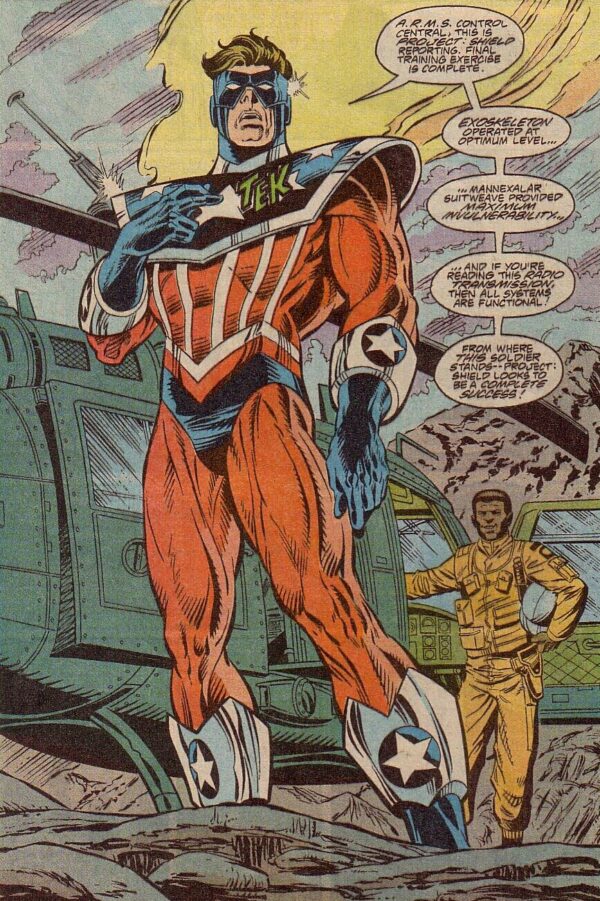 Our story begins as two United States military helicopters fly through the evening sky of Colorado. They are armed to the teeth and in search of their appointed target. Suddenly, they spot the enemy…..one man?! The lone figure stands defiantly in their spotlights. Wasting no time, they unleash heavy gunfire! The man runs at an incredible speed, sidestepping the bullets. He then disappears from sight. The helicopters search frantically. Just then, the Man reappears, a large boulder in his hands. He hurls it at one of them! It caves in the metal on one side and crushes the rotor, sending it spiraling to the rocky ground!

Before the pilot of the other craft can react, the Man leaps over the crashing aircraft and slams his body with incredible force into the other chopper! Tearing his way inside he knocks one of the soldiers out after he grabs for a concealed firearm. The other pilot simply smiles! He then begins laughing as he remarks how the man threw a boulder as a projectile. With the pilot smiling, the helicopter lands. The simulation has ended. The man then steps into the light. He stands clad in an armored uniform modeled after the American flag. (Well, there ya have it folks! Our tax dollars hard at work. Can you imagine if all of our troops wore this amazing armor? Of course, the question of camouflage comes to mind…….) 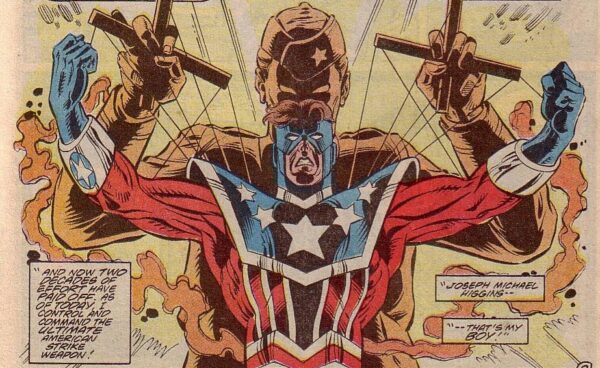 The strangely-armored man taps his earpiece. He asks how the exercise looked back at home base. He’s answered with resounding applause from the soldiers on the other side of the call. That is all except for one gruff-looking, old general who leaves the control room . The general appreciates the performance of the Shield armor that they have developed, it’s the man inside that he cares very little for. The original man to be called the Shield was a friend and an ally of his. That was until his mysterious disappearance in 1963. He was located by the U.S. military for a brief time during the Vietnam War before the hero took off his armor and vanished for good. Though the original Shield’s armor was extraordinary, it’s design proved impossible to duplicate.

The military however moved forward and designed an armor all their own. Now for the ideal man to wear it. No-one proved themselves more perfect for that role than the general’s own son, Lieutenant Joseph Higgins. Too perfect in his father’s eyes. That’s when Sergeant Higgins set up a falsified report in order to have his own son courtmartialed and demoted! This would show him humility and make him more easy to control! (Wow! The Shield’s father is one piece of work! My genetic father was a military man himself. He’s damn near this evil too. But while Joe gets bulletproof armor, I get therapy and meds. Ah. To live in the comic book world!) 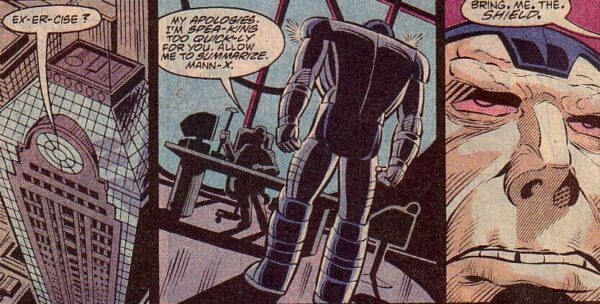 Later, Joe takes some much-needed time off and decides to visit his mother. She talks to him a bit about her divorce with his father and almost slips up and begins to talk about his courtmartialing. Feeling discouraged, he leaves her office and returns to his room on base. (I bet! Maybe his mom would like to bring up the death of a beloved childhood pet while they’re hanging out!) While there, he runs over the series of events that brought him to where he is now in life. Very little time passes before he’s on the move again. Upon leaving his room, he runs into his bestfriend. The two catch up a bit before they take a jeep together to a different part of the large military installation. At this exact moment, Joe’s father wraps up a secret meeting in his office with a tall, shadowy man. Sergeant Higgins demands that the man before him take his son out of the picture! With very little to say, the man turns. As light falls upon him, it is revealed that he is in fact more machine than man at all! This cybernetic monstrosity is called Mann-X and he leaves the office driven by his new orders and ready to carry them out! 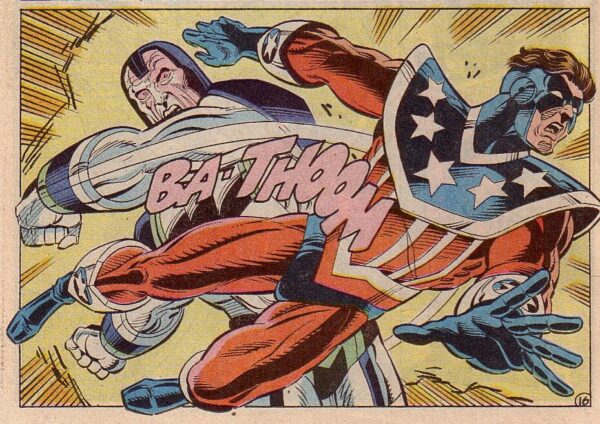 Time has passed and Joe now finds himself standing on the same ground that he fought against the copters earlier. He waits, encased in his powerful Shield armor, to perform in another combat test. This test however is to impress even more important men in the government. This simulation must go off without a hitch. Jets soar through the skies towards the hero, ready for a fight. Joe takes in a deep breath and tells himself that he must execute this maneuver perfectly. He must make his father proud. (Me thinks Joe needs a wake-up call about “dear old daddy”. The guy makes the Devil look like Elmo!) But suddenly, the jets turn and veer away from him! Confused, the Shield contacts the control team. They reply that the jets have been recalled because something strange has been picked up on radar. Before he can question further, a huge, armored fist sends him sailing through the air! 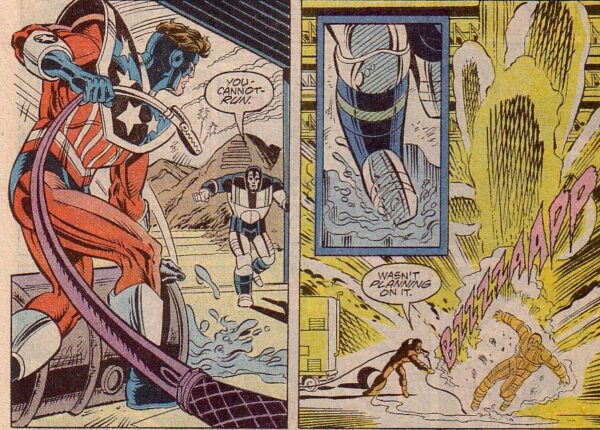 As Mann-X approaches the downed Shield, he says that he doesn’t want to hurt him, just give up the armor. Shield’s reply is that if he’s so interested in the armor, maybe he should show this mystery man just what it’s capable of! A furious fistfight ensues and Mann-X replies that he knows what the Shield armor can do, he’s the one who built it! (Didn’t see that coming, did ya? I mean, who wouldn’t trust the United States government? Fools, that’s who!) Shocked but determined, Joe waits until Mann-X gets closer and then electrifies his armor! The sudden jolt knocks the cyborg for a loop, dropping him momentarily to the ground! The Shield knows that this will not be enough, so he sprints into a military garage. An enraged Mann-X enters the building soon after but is met by a surprise attack! The Shield attaches powerful jumper cables to the man/machine’s armor, sending a powerful jolt of electricity into his armor! Mann-X drops, defeated! 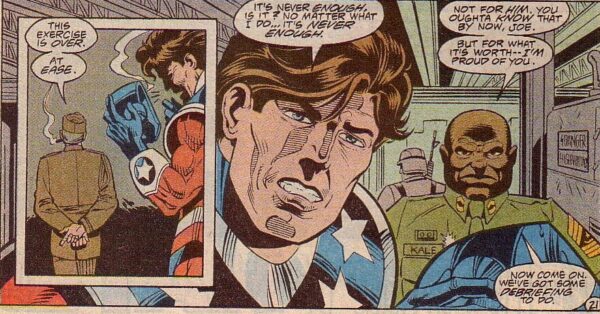 Soldiers surround Mann-X and prepare to take him into custody while the Shield is approached by the U.S. government brass. Surprisingly, though the test went badly off the rails, they were nonetheless extremely impressed! They shake his hand and leave. Just then, Mann-X springs to life! He tosses soldiers as if they’re mere ragdolls and breaks through a garage wall, escaping into the night! The Shield tries to follow the villain, but is stopped by his father. The general states that though he’s impressed others this day, the intruder has escaped. He then takes his leave. Joe removes his headpiece and sits down. He speaks to his friend. The realization has come that no matter what he does in life, it’ll never be enough for his father. He lowers his head in shame. (Preaching to the choir here, Joe. I know that feeling well. It’s nice how the Shield wants to impress his unworthy dad, but screw that guy! Who needs him? At least he has a great mom…..um…..wait.)

This article is dedicated in the memory of my stepdad, Bob Metz. You always wanted me to show off my knack for writing. I hope this story makes you proud. You are still a true inspiration to me and I will always love you. You will always be my superhero. Rest in peace. 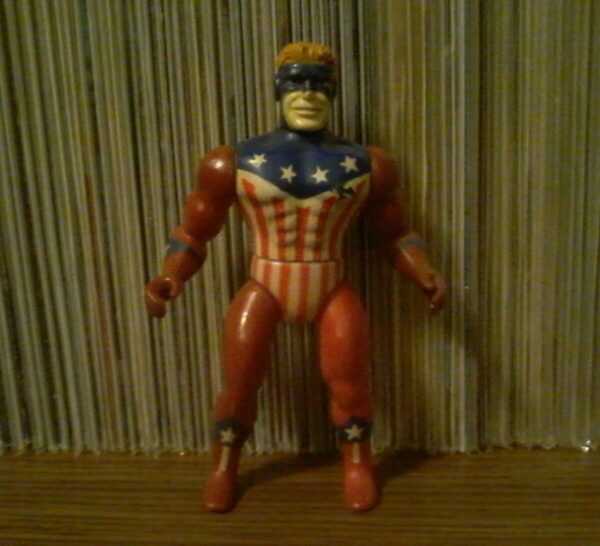