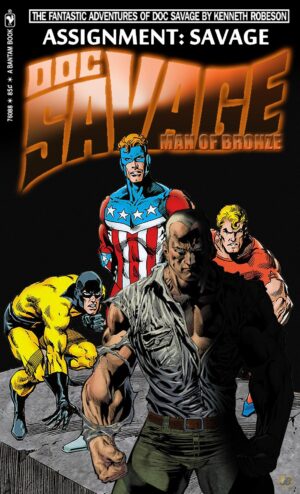 Ham and Monk enter the inner sanctum and see Doc Savage where they left him the yesterday afternoon, at his desk nearly obscured by stacks of mail. After about a minute of standing in silence Monk coughs.

Must be pretty engaging stuff. Why do you do it Doc? You were barely gone a week and look at the mountain of mail you have. Isn’t it time for a secretary yet?

I was just in 10 South American countries in 7 days. I’ll confess I’m a bit tired, but truth be told I find this activity quite relaxing. Why task a secretary with such a menial charge.

We discussed this before Doc, please just keep an open mind.

Yes. Now, what do you have to report to me? – asks Doc Savage as he rises and walks towards his friends.

Our informant network has been in overdrive on this one. The Mighty Crusaders are defiantly interested in you, though it’s still unclear why. ‘Jimmie 3-ears’ even claims the Black Hood roughed him up asking about where this HQ is.

Do you believe Jimmie?

He had a fat lip for sure, but with Jimmie, you never know. His information is always good, but I personally think he exaggerates a bit at times in hopes of a bigger fee.

This time I passed, begot the standard rate.

Like I said earlier, lots of chatter but no consensus.

I think we go on the offensive.

Though not known to the general public, several of the Crusaders have had their civilian identities identified by the authorities. With my connections as an attorney I’ve been able to learn them- says Ham.

That’s where we focus. Let’s see what circles they run in, in their civilian life. Maybe it will lead us in a certain direction and figure out why they are interested in me.

Makes sense- says Monk- I’d rather be proactive than have Joe Higgins come busting through that door.

Why does that sound familiar? -says Doc Savage with a wrinkled brow- The mail; I think I saw that name on a letter or package yesterday as I started sorting the mail.

Doc Savage quickly walks to his mahogany desk and begins scouring the stacks of mail that cover the desktop. Soon he picks up a small brown paper package bound with twine.

Doc Savage reads the label aloud- To the Hidalgo Trading Company in care of the president, return address, Joe Higgins, with no actual address. Postmarked almost 3 weeks ago.

Are you going to open it? Could be trouble.

It’s certainly not a bomb Monk as you well know all incoming mail is scanned by your very own explosives spectrometer.

I know Doc, but it could still be poison gas or powder or something. I haven’t finalized settings to detect that yet- says Monk.

I’ll hold my breath-replies Doc Savage with a grin- Why are you assuming the Shield wants to kill me? Everything I’ve heard previously is that he’s quite virtuous. Not sure why they are interested in me, but I seriously doubt it’s to kill me.

Without hesitation, but with caution, Doc Savage splits the twine with a letter opener and removes the outer wrapping. With a glance towards his colleagues, he opens the box. Inside are two items, a notecard and something small wrapped in tissue paper.

Ham and Monk look at each other as Doc Savage moves to unwrap the final item.

What is it Doc?

Looks to be an enameled pin of nice quality-replies Doc Savage as he holds it up for his friends to see.

Doc Savage presses the button between his thumbs then maneuvers his fingernails along the edge. With a quick twist, the face of the button pops off revealing condensed micro-circuitry.

I don’t think we’ll have to wait long to meet Mr. Higgins- says Doc Savage as he lays the pieces of the button on the desk.

3 minutes earlier in a hidden complex located within the woods of Fairfield County, New Jersey:

Fly-man is seated the computer console wearing a pair of oversized headphones. He flips switches and turns dials on an obvious mission to tune something in. Nearby, Black Hood, Shield, and Steele Sterling are seated at the conference table. Shield looks up to the wall clock and says- I guess Comet is hung up at the moment. Let’s proceed and if he has anything to add later, I’ll make sure we all know. As per last meeting, Clark Savage Jr. and his dealings in South America are the focus.

My opinion hasn’t changed- says Black Hood- Brain Emperor might be from another world and have psionics on his side, but that doesn’t necessarily translate to advanced technology. He has to have a source for the weapons stash.

Shield replies- I’m not convinced yet. He’s a man of mystery for sure, but I’m still struggling to envision him as an arms dealer.

Doc Savage was just in South America, a coincidence that that’s where the Brain Emperor is currently based out of? – says Black Hood.

I agree with Hood- says Steel Sterling-and we all saw the evidence Jaguar found. Logos on the crates and accompanying paperwork. The Brain Emperor’s staff kept such meticulous records. It’s crystal clear some of the weaponry can be tracked back to the Hidalgo Trading Company, Doc Savage’s apparent shell company.

Not arguing that. Still, why? – ask Shield

That’s what we need to ask him face-to-face.

Money still seems to be the obvious reason. The guy travels the world and has an entourage. He has to rack up the bills.

Shield interjects- True, but I always heard he was somehow funded from a Mayan gold reserve. If true he can’t be hurting for money.

Gold can eventually run out Shield. Perhaps he needs a new source of income. Selling tech could be the answer.

Eyebrows raise as a “ping” sounds from the nearby computer console causing all to turn towards it.

Fly-man makes a few notes and paper then announces to the group- As earlier reconnaissance indicated, it’s definitely the Empire State Building. The trackers activation narrows it down to somewhere in the 85-90 story range.

Perfect! Looks like a civilian Joe Higgins will soon be taking a trip to the observation deck of the Empire State Building and see the sites-says Shield as the rest of the group contemplate what that means.

Look for Doc Savage: Assignment Savage in Fall 1998 wherever Bantam Books are sold!