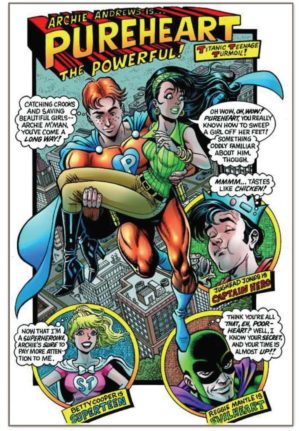 Shield G Man Club: Steve I heard you also had a pitch for the Superteens. What can you tell us about the Superteen pitch?

Steve Butler: About 9 or 10 years ago, I drew up the Archie superhero stuff seen below as a pitch to Archie Comics. I had been working for the company for about 8 years by then, mostly drawing the Sonic The Hedgehog title, but also on the Betty and Veronica “new look” books. When doing these, I decided to pitch it in two different styles, one that exemplified the Dan Decarlo//Stan Goldberg classic Archie look, and another that was more in line with the “new look” that I had recently drawn the characters in at the time.

I got very positive feedback from the guys in editorial, but nothing ever came from it. Oh well, that’s how it goes. Sometimes, it’s just about timing. Anyway, I recently found these pieces and thought I’d share them. Colors are by my good friend and co-worker Craig Schutt.

SGMC: Who did you pitch the Superteen comic to?

Steve: Mike Pellerito he liked it! But nothing ever came out of it0 I chalked it up to bad timing.

SGMC: Sonic was there number one title at the time and Mike was the junior editor? 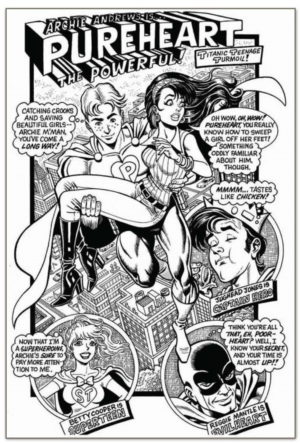 Steve: I think so, yes0 I think the book peaked under Justin Gabrie’s watch and continued on during Mike’s run as editor. This was pre-Ian Flynn as the writer.

SGMC: Did he ask for the pitch or was this all your idea

Steve: Oh, it was all my idea. I think I pitched it after I did that New Look storyline.

SGMC: What did Mike say about the pitch at the time?

Steve: Mike just told me he loved the look of the thing and said he had copies of the art on display at his desk for others to see, but never followed up with it, plus, I was busy drawing Sonic at the time, maybe they saw more value in me doing their flagship book at the time than taking a chance on something else that may or may not sell. 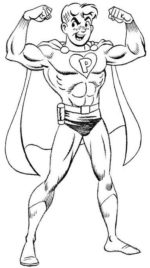 I didn’t even have a concise storyline. just some images I drew and thought might be a good idea to expand upon.

SGMC: Your pitch was for Spuerteens set in the Archie Universe?

Steve: Sure, kinda like if the “new look” guys I drew actually got superpowers.

SGMC: Did you envision a crossover with the MLJ Superheroes down the line or was this the Superteens only?

Steve: Oh, a crossover with the Crusaders would definitely, have been something I would have loved to do. I saw where they did exactly that fairly recently in a mini-series.

SGMC: How do you reconcile the Superteens with Superpowers and regular Archie & Friends in the same universe?

Steve: Well, my idea was to have the stories set in the “new look” universe, which I see as a separate thing from the regular classic Archie Universe.

SGMC: How would you have handled Superteens meet the Mighty Crusaders?

Steve: Oh, I dunno, probably bring them together in a joint effort to defeat the Brain Emperor or somebody who is menacing Riverdale.

Or maybe the Brain Emperor manipulated the Superteens to do his evil bidding using mind control or something, and the Crusaders come to blows with them that way and have to do something to shake the mind control, there are many ways you could do it and make it fun and exciting

SGMC: Can you see a Superfriends relationship with the Mighty Crusades as the JLA and the Superteens taking the place of Wendy and Marvin? 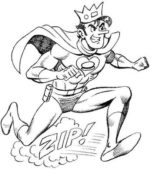 Steve: Maybe more like the Wonder Twins, because unlike Wendy and Marvin, the Superteens actually have superpowers!

SGMC: You would use the Golden Age version of the heroes?

Steve: For me, the Golden Age versions of the Crusaders are the best versions, they’re my favorites, though, I also live the Jaguar, Fly, and Lancelot Strong, who were more Silver Age characters. 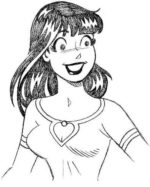 However, the current iteration of the Crusaders feature a lot of teenagers who are the same ages as the Superteens, so they’d fit right in- more like Wolfman and Pérez’s New Teen Titans back in the day0

Steve: Not really a monthly0 I was just wanting to pitch a mini-series, they hadn’t done anything on a regular monthly basis with them since the Red Circle days of the 80s, kinda knew pitching a monthly would not be a viable thing. But, it never even got to that point, just me showing them the artwork as a feeler that never went any farther than that. 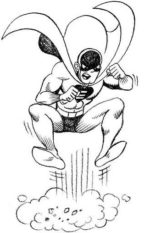 You gotta understand that this is the same company who approached me to do that MLJ Who’s Who thing. (that we talked about earlier) I think because they knew how much I loved those characters. and it took me the better part of a year to complete, to then have the bottom drop out of the project right at the time of final completion, because of the DC acquisition of the characters at that time.

SGMC: Could you have added the miniseries to your Sonic Workload at the time?

Steve: Probably. I’m always juggling assignments, it would have just meant rearranging some things for a time. But it wasn’t meant to be. All about the timing, I believe.

SGMC: Were you planning on writing and drawing the miniseries?

Steve: I would have liked to have given the writing a shot. It’s something I haven’t done a lot of in the industry. 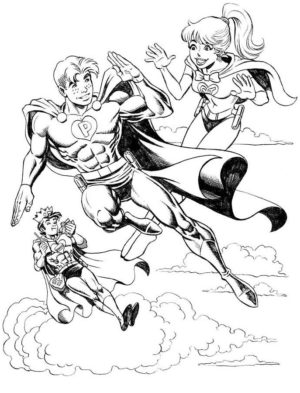 Steve: I’d probably make it like some kind of “event” happening and those particular kids just happened to be in the wrong place at the right time, like a meteor crashing and affecting them all, or maybe an alien abduction type thing, but something that affects them all at the same time, like how the FF got their powers together

Now you got me thinking how cool if a story that would make, ha!!!

Steve: When they actually came back around to doing something g with the Superteens, and even the Crusaders, they were tapping their newer, younger talent for it0

SGMC: Did they tell you they wanted newer younger artists?

Steve: They didn’t tell me they wanted new artists. I just saw the books when they came out and that they were going in a new and different direction.

I do remember mentioning to Paul Kaminski once about the possibility of doing some of that New Crusaders stuff that directly pre-dated the Dark Circle, but he kind of changed the subject and that was that I think he probably knew they had other plans and already had their art teams in place by then. 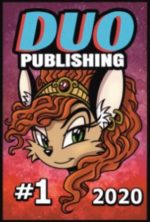 SGMC: What did you think of the Fox series?

Steve: I LOVED the Fox series!! If the entire Dark Circle line would have had that same kind of vibe, I would have been all over it! As it stands, that’s some of the best material to come out of the MLJ line, showing a true homage to what came before, absolutely loved it!!

SGMC: Did you talk to them about working on the Dark Circle comics?

Steve: I don’t think so, not for the Dark Circle stuff, that was around the time I was doing the John Aman Amazing Man series with Barry Gregory and that was taking the bulk of my time. 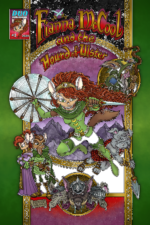 SGMC: Would you still be open to doing the story today?

Steve: I’d have to think really hard about it, on account of I’m in the middle of doing my own projects these days with my daughter, and they’re taking up the bulk of my time, but, if the opportunity presented itself, well, I do love these characters!!

SGMC: You and your daughter have the first Kickstarter Fianna McCool and the Hound Of Ulster. What’s next?

Steve: Well, Fianna is a four-issue thing, we’ll be doing a Kickstarter for all of them. 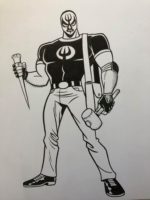 Steve: After that, I have a horror-hero themed idea.

Steve: Because I loved the horror-themed heroes when I was a kid. Werewolf by Night, Swamp Thing, Ghost Rider. 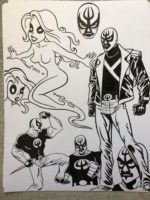 Steve: Doc Lazarus “deceased” masked wrestler back from the grave to fight Zombies, Vampires, and Werewolves. A tribute to the horror hero comics I loved as a kid, As well as those classic El Santo movies I used to love to watch.

SGMC: Where does that leave Galavant Comics and Charlton Arrow?

Steve: I still do covers and character designs for Gallant Comics, but have moved over to doing my own projects with my daughter. Together, we’ve started “DUO Publishing”, with Fianna McCool and the Hound of Ulster being our featured project. 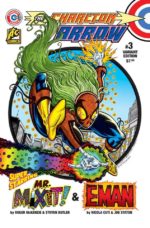 Steve: As for Charlton Arrow we’re in talks about future projects there as well.

Steve: I hope not! But Mr. Mixit is a joint production between myself, Mort Todd, and Roger McKenzie. I believe we’ll be seeing more of him, the timing just has to be right.

SGMC: And of course there still are commissions and covers

Steve: I do variant homage covers for Brian Pulido on a regular basis.

I have a YouTube channel “Steven Butler Studios” I’ve been making regular drawing videos for it.
https://www.youtube.com/channel/UCn83IxWW-hF7xRH4VGGd0Pw