MICHAEL DUNNE TALKS ABOUT COMMISSIONS & TOO MANY HEROES 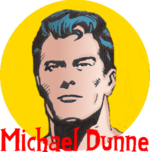 I have known Michael Dunne for as long as I have been online. We are both fans of the Mighty Crusaders and old comics and we bonded over that. Mike has been a contributor at First Comics News with me as well. He and his wife Amy have attended conventions and done convention reports for First Comics News as well. However, we never had the chance to really sit down and dig into his fandom. Fortunately, this fanzine has given us a chance to look at his collection of commissions and cover recreations. 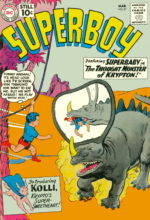 Michael Dunne: I would like to say 6 or so. I know the first comic I ever bought was Superboy #87, the second was Green Lantern # 5, but I had to have been reading them beforehand to have begged my parents to let me buy them.

Mike: Offhand I would have to say the bright and colorful costumes.

Mike: Absolutely not, they would allow me to buy one book a month. I quickly learned to use my milk money to buy comics instead, smuggling them into the house was another issue, but I became quite inventive.

SGMC: How does your wife feel about the time money and energy that goes into your hobby? 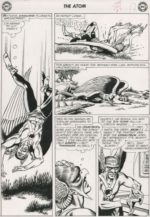 Mike: Amy has fully embraced the hobby and gives me commissions every birthday and Christmas. She also has encouraged me to make outrageous purchases like my Silver Age Atom #7 page. I would lovingly say she is an enabler.

Mike:: In the 60s when Archie made a run at the superhero craze with the rechristening of the Fly as Fly-Man. I was aware of the Fly and the Jaguar and would read their stories occasionally, but at that age, I did not appreciate the Archie superhero artists the way I did Infantino, Gil Kane or Jack Kirby. Again the bright colorful costumes caught my eye. How could you not love the Shield? 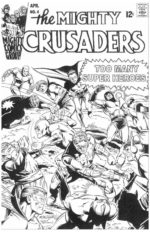 SGMC:: What made you connect with the Crusaders?

Mike:: Crusaders #4. Oh my gosh, that cover and all those heroes in one book. I would say that arguably that may have been Jerry Siegel’s best Mighty Comics story.

Mike:: The Shield followed closely by the Web, there is something about that costume that intrigues me especially the scalloped mask. The only artist who ever seems to have nailed it properly is Paul Reinman. I like the character so much that I commissioned George Perez to do his take on the character.

SGMC: When did you start collecting commissions? 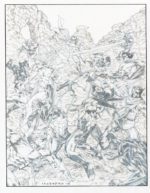 Mike: 2002, after discovering the internet, the first one was a Dick Ayers Western followed closely by a Gene Colan commission and a Shelly Moldoff early Silver Age Batman family commission. I cannot tell you how thrilled I was to have a commission by the man who had entertained me as a 7 or 8-year-old. I love those late 50s, early 60s Batman stories.

SGMC: How do you choose an artist for a commission?

Mike: Initially I tried to get the artists I grew up with doing their take on familiar characters. Most have passed on now so when I do a commission it is to follow a theme like say my Crusaders # 4 reinterpretations or Bruce McCorkindale’s Amazing Blue Beetle reinterpretations… If not a theme than I want to see the artist’s take on MLJ-Mighty or JSA characters. 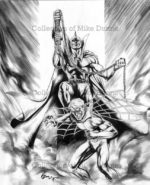 SGMC:: The Mighty Crusaders have a lot of uniform variation in each hero. What elements are important to you?

Mike: I guess I want to see them as I was introduced to them when I was a child. So I do want to see the Shield with trunks. I absolutely want to see the Comet with the original uniform and with the Giant-Man style boots ( I realize Jack Cole designed that look long before Kirby.) I cannot decide on the Hangman, with a cape without a cape? With a cowl that covers the nose a la Batman or without? That’s usually for me an Artist’s choice. Buzz did a killer Hangman for me.

SGMC: You have hundreds of pieces of original art, what do you do with all of them? 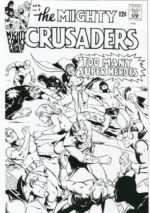 Mike: A lot are framed, the rest are stored in Itoyas, perhaps I need a bigger house with more walls. Amy has no issues with art on the second floor of our home and has slowly allowed some art to creep downstairs, I think five very special, cherished works are framed downstairs.

SGMC: When did you decide to share them on comicartfans.com?

SGMC: How do you decide on a character for a specific artist? 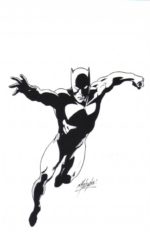 Mike: If an artist uses a lot of blacks I might ask for a Dr. Mid-Nite or Hourman commission. Matt Haley did an incredible Fox commission for me. If I an unsure of how they might turn out I usually ask for a Shield or Alan Scott piece. Sometimes you get pleasantly surprised, Allan Goldman and Rudy Nebres come to mind both did incredible commissions for me. In fact, a Rudy Nebres piece hangs in my work office.

SGMC: I know the price is different for each artist but what is the price range for a professional commission?

Mike: That is hard to answer because prices have escalated so much in recent years. There are some artists I would like to commission but their ask is way too high. I do understand an artist must put a value on their work, I also think you have to understand the market.

SGMC: You have a lot of versions of “Too Many Heroes” what makes this cover so appealing to you? 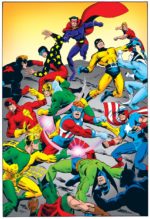 SGMC: How much of the final version is your vision and how much is the artist’s inspiration?

Mike: When it is Crusaders #4 I ask that they do their take on the cover usually asking for the Fly and Spider to be left out and giving them a few characters like Steel Sterling or Fly Girl as possible options. for justice Society commissions I have learned to be more direct in my ask as time has gone on. One of my favorites is Bob McLeod’s MLJ-Mighty Commission. That was one of my earliest and at the time most expensive commissions and I simply asked Bob to draw the MLJ characters. Early on I learned to make sure to provide a reference. 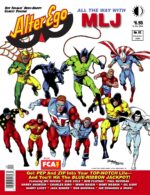 SGMC:: A few of your pieces have ended up in print, specify in Roy Thomas’ Alter Ego. How did that relationship come about?

Mike: Roy and I have corresponded throughout the years since I started collecting original art in 2002. I have sent him copies of my acquisitions and he has sometimes chosen to print them in his magazine. Four and a third of my commissions have become covers for Alter-Ego, two of which have featured the MLJ characters.

SGMC: When the pay you to use your art does it cover the cost of the commission? 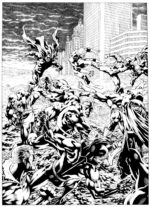 Mike: No. Generally, if my art is used I get a free copy of that issue. Regarding the covers, I believe I received a small fee for the Christmas commission that was used for a cover. I do not believe any money was paid for the use of my commissions for the MLJ-Mighty covers or the Justice Society back cover for issue 50.

SGMC: What advice can you give someone interested in starting to collect commissions?

Mike: First of all provide reference I can recall a story that Gene Colan did a commission (which was not for me) and he drew Captain Marvel, his version, the commissioner wanted Gene’s take on the Fawcett character or vice versa. I provided a reference for a character once and the artist dew the hero’s original uniform I wanted the second and far superior version. 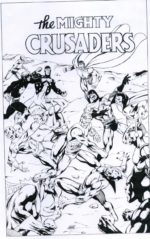 If you have a particular scenario in mind communicate that politely with the artist.

Finally, understand that the money you spend on commissions you will most likely not get back if you decide to sell the art down the road. Commission what you like, because they are to be enjoyed and frame them if possible, I walk by my Bob Layton JSA and Rick Hoberg All-Star Squadron commissions every time I walk down my stairs and I smile every time I look at them, that is what commissioning is all about.