If you weren’t born in time for the Silver Age of comics – fro the appearance of the Barry Allen “Flash” in Showcase #8 to the mid-1970s, when the end of the comics industry was predicted – again – you may feel you’ve missed out on a lot.

But it isn’t too late.

If you find an attraction to the unique flavor of the MLJ/Archie Adventure Comics, or Radio-Mighty Comics, or the Red Circle, or the Impact line from DC, or the Dark Circle cycle that is the most recent reincarnation to the heroes of those days, it is not too late. Thanks to fanzines, web pages, and YouTube, you can saturate yourself in the world of MLJ like the old folks.

I was born in 1950, which gave me a chance to see some of the premier Silver Age appearances (I remember picking up the first Hal Jordan-Green Lantern appearance in Showcase and the first appearance of Dr. Strange in Strange Adventures, with all the class first appearances and growth of comic book stories from “something for the kiddies” to complex stories of teen-aged angst and confused self-identity (not to mention the sexuality).

But with the expansion of DC, the transition from Atlas to Marvel, and the brief fireball that was Charlton, there was the Archie Adventure Series which introduced me to the slightly elevate4 stories of Joe Simon and the superior art of Jack Kirby, two long-established pros who had grown up with the comic book industry. 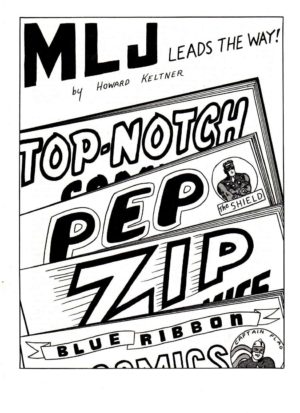 I did not know there was a world before the Silver Age, though my parents tried to tell me. I thought they were kidding when they told me about the Green Hornet or The Shadow. My real exposure to the MLJ characters was in an early fanzine – ALTER EGO #4 with an article by devoted fan and member of The Texas trio, Howard Keltner. In his own amateur comic Keltner had published is own version of the MLJ character Mr. Justice, dubbed Dr. Weird. But before I saw Dr. Weird I read Keltner’s write-up on the little publishing house that began with lurid pulp magazine, briefly flourishing as the MLJ Comics line, and falling into a postwar rut with the prototypical teenager, Archie. And his pals. Lots of pals.

But for a brief and shining moment, there was MLJ.

You can get the same exposure to that original article that took me into the heroes of PEP, TOP NOTCH, BLUE RIBBON, ZIP, and JACKPOT COMICS. You may not be able to visit one of the first “old comic book” chops (Cherokee in Hollywood, CA) to buy some of those old issues at $3-$5 each (outrageous at the time), but you can read the stories and see the pictures. You might even develop a fondness for the characters.

Download ALTER EGO #4 for free from comicbookplus.com with a free signup, and you might want some of the dozens of other MLJ issues available to enjoy at the same price. You can also enjoy nine more issues of the early ALTER EGO, and hundreds of other non-MLJ titles. And free is something most of us can afford.

And hundreds of other cool downloads, including original MLJ comics. You can read the originals. Your friends may wonder what happened to you because you haven’t been seen in weeks, yourself reading so much.

Alter Ego was the first comic’s only fanzine, even though Xero had a comics column earlier – Xero was a science fiction fanzine. A-E marked the first time people had focused on casual little journalistic forays into the four-color world. Jerry Bails, the publisher of A-E (with Roy Thomas) actually moved more into the academic study of comic books.

But MLJ was one of the first topics to get this respectful, journalistic, and affectionate exposure to the DC-Marvel crop of comic fans that were developing.

I was able to afford some Golden Age comics of my own, and a few of those were PEP, ZIP, and my personal favorite (because of the Howard Keltner article), JACKPOT. And you can download all of the Issues of this classic at https://comicbookplus.com/?dlid=22595.

It was the dawning of the age of photocopies but the “ditto” master, the spirit duplication school copier, was the technology that let people who loved any particular genre of comics, and the love of the MLJ/Archive Adventure characters was there throughout. Star Studded Comics, Fantasy Hero, Heroes Hangout, Masquerader, Komix Illustrated, Down Under (Australian comics), The Komix (South African from later pro John Wright), and more appeared in my mailbox for month after month. GB Love through the SFWA and Rocket’s Blast/Comicollector (a merged zine) moved his zine from a simple mimeograph and ditto zine to a full offset channel that connected hundreds of fans, which caused this new generation to encourage each other and improve their craft. People like Jim Starlin, George R.R. Martin, Bill Dubay, Landon Chesney, Don Rosa, and dozens of long-admired professionals mixed and created a whole new breed of comic books.

Before the internet, I found dozens of other people doing fanzines. One, Rich Buckler (publisher of a couple of ditto-zines – SUPERHERO and INTRIGUE COMICS, would later become movers and shakers in the later iterations of the MLJ tree. Rich was drawing based on what he could copy from his favorite artist – Jack Kirby, but he was coping well. His writing was a notch above the other fan authors in the dozens of amateur zines with circulations under 200 each. He pushed and was responsible for the whole Red Circle version of the revived titles. He knew how to give proper art direction to solid, upper-crust comic artists, like Steve Ditko, Alex Toth, Rudy Nebres, Alex Nino and more. But his original fertile ground was comic fandom.

The internet offered new ways to channel the next generation of zines, including the regrowth of Alter Ego through the late master, Bill Shelley. Bill collected the original works from fandom and translated them into clean, offset magazines that could carry the journalist approach established by Jerry Bails and the full “gosh, wow” that drove new fans into the pleasure of our chosen hobbies.

And through the zines and the internet itself, MLJ kept its footing and continued to grow.

YouTube provided a channel and several producers came up with their own personal takes on the MLJ mythos, and they are now foundation documentaries to introduce people to the history and the mythos of MLJ.

And YouTube combines with Archive.org to give you downloads that can give you the experiencing of listening to the only MLJ character make it into the most significant entertainment mass media of the day… radio.

Another YouTube channels offers some short videos to cover MLJ characters, including some minor characters, plus The Comet and the Blue Beetle. There may be something in the series that you would appreciate as you develop your MLJ muscle.

The second link gives a .zip archive with all of the surviving radio program, curated by the Old Time Radio Researchers (OTRR) volunteer core of engineers. This can lead you to the other radio heroes that entered the comic book, pulp, and radio files – The Green Hornet and The Shadow (who had a tragic resurrection as a spandex-wearing superhero in the days of the Radio Comics revival).