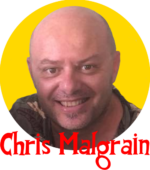 Shield G-Man Club: When did you start reading American comics?

Chris Malgrain: In the 1970s, at the age of 8 or 9, in the 130-page black and white pocket comics that were so popular in France. They contained material from Italy, France, England, and the US and covered all genres: sci-fi, war, western, humor, jungle, pirates, medieval, etc. with a few superheroes. The Marvel and DC heroes were published in bigger-sized anthologies in color. I started reading them when I was 9. 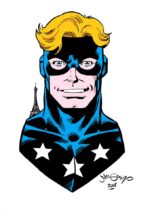 SGMG: What attracted you to them?

Chris: Their dynamism, and then, when I got into superheroes, their colorful costumes, and superpowers, as well as the huge cities in which their adventures took place. At the age of 9, I already knew I wanted to be a comic book artist and when I discovered all those superheroes, I decided I’d draw this kind of comics in America one day. I started learning English the following year at school and my comic book dream became easier. 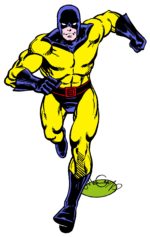 SGMG: Where did you go to art school?

Chris: I chose artistic classes in Junior High and after that wanted to go to the only Comic Art School that existed in France at the time, but it was way too expensive, so I went to university instead and studied English. Not only the language but literature, American and English history, and civilization, etc. Four years later I became a teacher and continued drawing in parallel. I’m a self-taught artist. I bought anatomy and perspective books and drew as much as I could. I started drawing my first comics on school copybooks when I was 7. I drew hundreds of pages and I think that’s what gave me the sense of story-telling that people say I have. 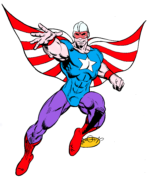 SGMG: When did you break into Comics?

Chris: I worked in French and Belgian fanzines besides teaching and got my first assignment with a professional publisher in my late 20s. That publisher was Semic, formerly called Lug, who had published so many of the black and white pocketbooks and Marvel comics that had filled my childhood with wonder! I was very happy to draw some of the French and Italian characters I grew up with. One of my editors at semic was Jean-Marc Lofficier, who wrote some stories for Marvel and DC and who was Moebius’ collaborator and agent for a while. One day, he told me via email that IBooks, the company run by the late Byron Preiss, was looking for artists. I emailed them samples and was hired immediately. 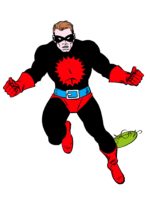 The book I did with them was Stan Lee’s Alexa. Yes, Stan Lee, my idol! Not only did my American Dream become a reality, but I also met The Man at San Diego 2004 and signed a preview of the book with him! I was working for a popular French magazine back then and continued working for it after my adventure with Stan. A few years ago, I decided to only do what I love, and so I quit French Comics. I’ve worked with Arcana, Red Anvil and many other indie publishers. I also publish my line of retro comics, which can be found at 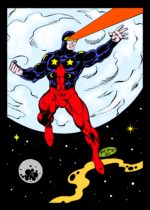 SGMG: When did you discover the Mighty Crusaders?

Chris: I first discovered the Fly’s solo adventures in the pocket comics, and later the Crusaders in color. I was about 10. What is funny about the Fly is that if his name had been normally translated, he would have been called La Mouche, but this sounds ridiculous in French, and since the publisher was not able to find a good French name, the Fly became…Mosquito! Another English word, but easier to pronounce than Fly.

SGMG: How did you get involved with Organic Comix? 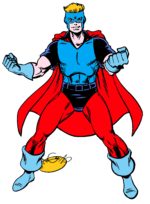 Chris: I met Organic’s founder, Reed Man, at a convention, and sometime later he was hired by Semic too. We met more often and he became my colorist on The Rovers (which was published by Arcana in the US) for another publisher. Reed is a writer/artist/colorist/publisher and we naturally got to collaborate on his Organic Comix.

SGMG: Did you get to work on any of the Joe Simon characters and Organic Comix?

Chris: I only did an illustration of Spider-Fly (a combination of Kirby’s original Spider-Man’s costume and The Fly).

SGMG: Did you get to work with Jim Simon? 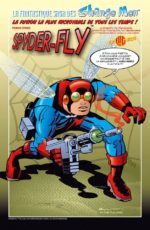 Chris: Jim offered me to work on his characters and I was initially very interested in drawing them because I thought he wanted to do classical comics. I drew several characters but he told me he wanted to transform his heroes into modern ones with the kind of costumes I don’t like, so I quit.

SGMG: How did you get involved with Temporal comics?

Chris: Darrin Wiltshire liked my Oniric Comics, my own little company, on Indyplanet and contacted me on

Facebook. He commissioned me to draw his own heroes and then launched his Heroes of the Golden Age line.

SGMG: How many characters have you drawn for their Who’s Who?

Chris: About 170. Seven issues. The fourth one is about to come out. 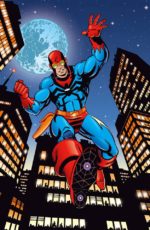 SGMG: How many issues are planned for the series?

Chris: It’s supposed to go on until there are no more characters to present.

SGMG: Are there MLJ characters in all the issues?

Chris: No, the first ones appear in Issue 7. Initially, the book was called Heroes of The Public Domain and I drew dozens of them immediately.

SGMG: Who are your favorite MLJ characters? 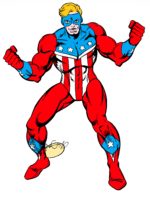 Chris: I’d say the Fly, for nostalgic reasons, and then the Shield and the Comet, whose costume looks great to me.

Chris: More MLJ, and since this is Heroes of the Golden Age, I’d love to include Namor, the Human Torch, Captain America, etc. Not sure this will happen, but I’d love that! The first three issues are available at IndyPlanet.com/Temporal-Comics