Maurice Coyne, Louis Silberkleit, and John Goldwater formed MLJ Magazines and started publishing in November 1939. The company name was derived from the initials of the partners’ first names.

John L. Goldwater (February 14, 1906 – February 26, 1999). John Goldwater grew up as an orphan in Harlem, New York, as a teenager he traveled the country working odd jobs. Eventually returning to New York, he began working loading magazines at the docks, before starting at Independent News. Goldwater served as editor in chief and co-publishers for MLJ. Goldwater was focused primarily on the editorial end of the business. Goldwater was one of the founders of the Comics Magazine Association of America and served as its president for 25 years.  The Comics Magazine Association of America is the best known to comic fans for its Comics Code Authority. He was also a national commissioner of the Anti-Defamation League.

All of them, Maurice Coyne, Louis Silberkleit and John Goldwater, had met when they worked at Independent News, for Paul Sampliner. Paul Sampliner, Jack Liebowitz, and Harry Donnenfeld, of DC comics, founded Independent News, which was, in turn, the distribution company of DC comics.  Louis Silberkleit worked on some publishing ventures with his friend Martin Goodman who was a founder of Timely/Marvel Comics. 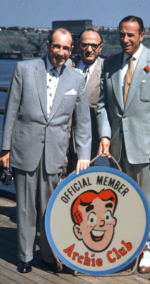 Martin Goodman and Louis Silberkleit, along with Maurice Coyne, were one of the earliest publishers of pulp magazines, with their company, Columbia Publications. Columbia published westerns, science fiction, detective, and romance, pulp magazines.  Many of their writers who went on to become famous got their start working for Louis Silberkleit at Columbia Publications.  Among these were Harold Robbins, Isaac Asimov, and Harry Sinclair Drago, to name a few.

John Goldwater started his own company; Periodicals for Export, Inc., and he started buying unsold periodicals, mainly pulp magazines, from publisher Louis Silberkleit and exporting them for sale abroad. Observing the success of the Superman character in the infant comic book industry in 1939, John Goldwater joined Louis Silberkleit and Maurice Coyne in launching a magazine publishing company.

Their first comic was Blue Ribbon Comics published November 1939; the first issue was half color with the remaining pages red and white tints. In December 1941 Top Notch Comics was introduced. Then in January 1940, Pep Comics debuted featuring the Shield, Americas first patriotic comic book hero, by writer Harry Shorten, also the companies Managing Editor, and artist Irv Novick. The Shield was the cover feature for Pep Comics until, March 1944 when Archie became the dominant feature; the Shield continued in Pep Comics until January 1948. Also of note is the fact that the Shield predates Joe Simon and Jack Kirby’s Captain America by 15 months, and his sidekick Dusty, from Pep Comics #11, January 1941, predates Bucky by 3 months.

John Goldwater inspired by the popular “Andy Hardy” movies starring Mickey Rooney; wanted to create a comic about a normal person to whom readers could relate. He created “America’s newest boyfriend”, Archibald “Chick” Andrews. In Pep Comics #22, December 1941 writer Vic Bloom and artist Bob Montana, published Archie Andrews first adventure. Gloria Goldwater, John’s wife said “He loved Superman and he wanted to create a kind of opposite to Superman,” “Archie was based partly on a red-headed friend of his named Archie,” Mrs. Goldwater said. “He also created Betty and Veronica. Then he decided Archie needed a really good friend. That was Jughead. It just grew and grew.”

John Goldwater created the idea of Archie. However, John Goldwater was not an artist, so he went to the bullpen and asked the various artists to come up with a likeness. At age 21, Robert William Montana (Bob Montana) created the likeness of Archie and continued to draw Archie for 34 years, until his death on January 4, 1975.

As Archie’s popularity grew MLJ Magazines changed its name to Archie Comics Publications. In the mid-fifties the advent of television caused the pulp magazine industry to suffer as television became a dominant form of entertainment. With slumping sales, Louis Silberkleit and Maurice Coyne decided to discontinue Columbia Publications. Maurice Coyne stayed on at Archie as Chief Financial Officer until he retired in the 1970’s.  Louis Silberkleit and John Goldwater shared the same office and ate lunch together for their entire business career. 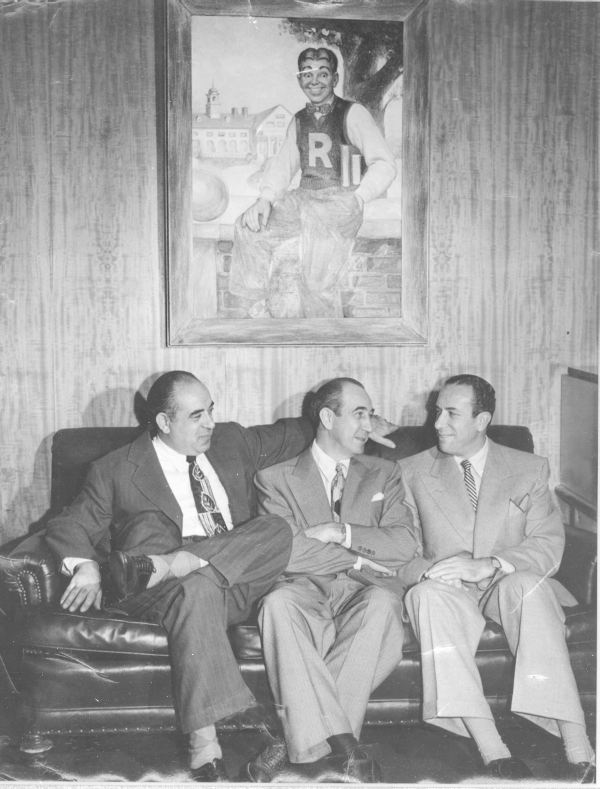 John L. Goldwater served as Honorary Chairman, a post he held until he died of a heart attack at his home in Manhattan, February 26, 1999.

Today, over 60 years since the founding of MLJ Magazines, Archie Comics Publications is a family business publishing wholesome family entertainment. Archie remains a major market force in the comic industry as a more than 15 million dollar a year company with only 23 full-time employees and 30-40 freelance writers and artists, selling about 800,000 comic books a month.  The Archie Comics website receives more than 18 million hits a month.

To visit Archie Comics on the web go to www.archiecomics.com