Journey Into Comics: ARCHIE RULES IN THE FLYOVER STATES

From Newsarama, reprinted with permission 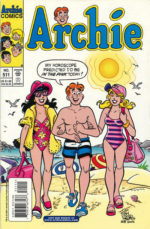 Allan Grafman, president of Archie Comics Entertainment, has an air of astonishment when he talks to newspaper reporters as if he is as surprised as the figures as he suspects the reporter will be.

“Do you know how many comics Archie Comics Publications sells,” he asked earnestly. “Eight-hundred thousand, and that’s every single month. And 70 percent of that is sold in mass-market stores.” 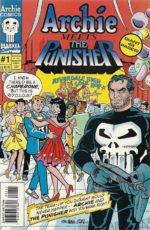 Hey, we all laughed at Archie teaming with the Punisher a ways back, but putting a DC or Marvel character with Archie may be a way to get the characters in front of more eyes than they can via the direct market. Batman & Jughead, anyone? Jimmy Olsen & Archie…think of it, after an accident where they’re both knocked unconscious, they get mistaken for the other. Archie gets kidnapped by one of Superman’s enemies (while on a field trip to Metropolis), and meanwhile, the amnesiac Jimmy heads back to Riverdale and has to fight off Betty and Veronica’s affections.

Grafman said that Archie’s are the 12th largest selling periodical in the Walmart chain, that’s putting Archie and friends right up against People, Time and all those teen and bride magazines. 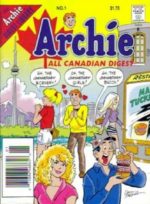 If this is a surprise, that’s because the primary readers are kids between 6 and 16, slightly more girls than boys. “We are strongest throughout the Midwest and Canada,” he said. “We’re not so strong on the coasts, the big cities where kids grow up faster.”

Grafman wants to do more, not with comics, but with television, movies, licensing and merchandising, music and “potentially” he said, theme parks. This move to take a bigger bite out of the American pie started earlier this year. 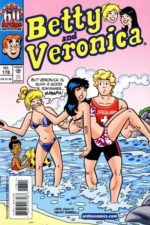 The big coup came when Miramax Films announced plans to make a live-action movie starring Archie’s gals, Betty and Veronica. Why the girls and not Archie? Do you have to ask?

“Archie will be a big part of it, of course,” Grafman said. “But we thought it would be more interesting to focus the movie on Betty and Veronica, their friendship and competition. Everyone would like to be in Archie’s position, he’s a lucky guy having two girls fighting over him.”

The difference between Archie’s core audience and many of the people reading this article is that the younger kids will not read that line and think, “Oh yeah, that’s hot.” Come on, you know that’s what you were thinking. Archie is wholesome and as American as apple pie. 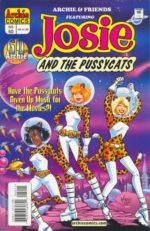 Grafman said Miramax is on a talent search to fill the roles of Betty and Veronica. He said they would also like to start production on a new Archie Comics Riverdale Stars television show within a year. It will likely be some kind of talent search program for kids. Grafman said they are in negotiations with two children’s television networks.

The movie is about two years away. Don’t look for Arnold Schwarzenegger to pay Mr. Weatherbee, the film will have “no $10 million stars,” just good actors.

I would like permission to reprint your Mighty Crusaders section of Journey into Comics at www.mightycrusaders.netRik