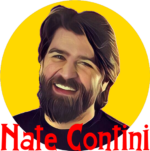 Nate Contini and his brother are working on a very special Mighty Crusaders project that we will mention at the end of this interview, he is clearly a huge fan of the Crusaders and he was nice enough to share his backstory and art with us.

Nate Contini: My father was an avid reader of comics. He grew up reading the original marvel stuff, as well as the silver age DC books. He sort encoded his love of comics on myself and my brothers. 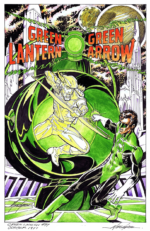 Nate: Oh extremely so. In fact, I practically learned to read from Green Lantern comics my Dad gave me.

Nate: When I was younger, I was drawn to over personified heroes, so characters like Captain America, Spider-Man, Shield, Flash, I couldn’t get enough of them. As I’ve gotten older, I have gotten into more darker toned comics. Currently, my favorite titles are Marvel Comics Daredevil, and Image Comics Die.

SGMC: When did you start drawing comic characters?

Nate: I honestly cannot remember a time I didn’t draw superheroes. Ever since I could hold a pencil, those colorful characters graced my pages. In fact, my mother received a letter from one of my teachers telling her how I paid no attention in class and instead sat and drew the entire time. 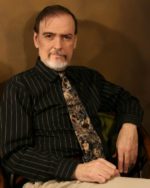 Nate: My Father taught me the basics, teaching me to draw with his very Kirby-esque art style I also took art classes in high school, as well as a few in college. I even tried the Joe Kubert School’s correspondence course. Had I been more mature at the time I would have stuck with that better. A lot of my fine-tuning though was done on my own, but it would not have been nearly as well if I didn’t have the foundation I had.

Nate: My first encounter with the MLJ heroes was when my brother Jason started getting the Impact books. I would immediately grab his copy after he finished it and read it. After that My father introduced into the earlier stuff.

Nate: I think the thing that made me most interested in them was the fact that they were not Marvel or DC. Well at least at the time I didn’t realize Impact was DC. 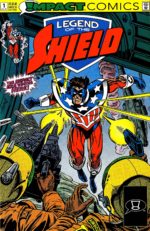 SGMC: Who is your favorite MLJ character?

Nate: This is a tougher question, but I would have to say, Shield, followed closely by Fly, or Fly-Man if you will, Comet, and Black Hood.

SGMC: What do you think has made them so enduring that they have been published for 80 years?

Nate: If I had to take a guess, I would say its the history and the tropes they started. From Shield being the first patriotic hero to Comet being the first to die and resurrect, in comics.

SGMC: When did you start doing your interpretation of the MLJ Covers? 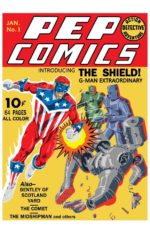 Nate: That didn’t actually start until last December. I did it on a whim for a Christmas present for my Brother Jason Contini.

SGMC: What is your process?

Nate: My goal is to try and make it look like those propaganda posters you would see during say WW2. Well, what I do first is I essentially block out all the base colors. On the Pep 1, I did, for example, I laid out and filled all the red section in one shade of red. Then I went back and added 2 layers above that. One for shades; which I use a darker color, and one for highlights. They are decided by where I think the light source is coming from, then I use what is called the Lasso tool in photoshop, marquee out the section I want color, and fill it in. When finished it looks like its a complicated process but in my opinion, it’s relatively simple. 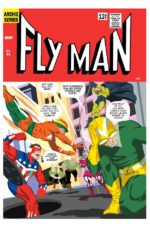 SGMC: When you look at the older covers what do you try to recapture?

Nate: I like to try and do the classic covers, from the MLJ and original Archie era. Those have large blocks of a solid cover at the top of the page, which makes the image have that propaganda poster look. I have been trying to do one with Impact’s Legend of Shield #1, but it’s not looking as good, and I may just scrap it in the end.

SGMC: What else are you doing with the Mighty Crusaders?

Nate: Well currently I’m a Producer and Costume/Art Designer for Jason Contini’s fan film Red Circle Investigations. This has been a dream project of his, and I’d be lying if I said I didn’t want to do one as well. Essentially though I am helping Jason with ideas for the story, if he wants those ideas, and I designed all the costumes the heroes will be clad in. as well as Jason and I are planning something else MLJ related, but its too early to give details on that now, but I thought I’d drop a little tease here.