The JC/Texas/Red Circle Days of Thunder

by The Groovy Agent from Blinded Me With Comics

The JC/Texas/Red Circle Days of Thunder 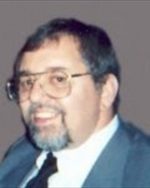 Like I promised last week, I’m back with a huge (I’m talkin’ gi-normous!) post on T.H.U.N.D.E.R. Agents of the 1980s. It’s so big, in fact, that it’s gonna wind up being two posts (at least–I keep finding more stuff to write about! Halp!), so this week Ol’ Groove is gonna look at the early part of the T.H.U.N.D.E.R. Agents revival (JC Comics, Texas/Noble, and Red Circle/Archie Adventure), next week will cover the rest of the 80s (Deluxe and Solson, plus a surprise or two, perhaps…). Why am I tellin’ ya all of this? You’re intelligent–you’ll figure it out! Onward!!

In late 1981/Early 1982, the Silver Age super-team created by Wally Wood and company started on the comeback trail. Throughout the 70s, fans pined away for the T.H.U.N.D.E.R. Agents, wishing someone, somehow would bring Dynamo, No-Man, Raven, Lightning and the rest back in new adventures. It almost happened in the late 70s, when Marvel editor-in-chief Jim Shooter tried getting the publishing rights to the Agents, but found them mired in legal questions pertaining to their ownership. When the Agents did finally make their triumphant return, those same legal questions would plague them in ways worse than the Warlord, Dynavac, Demo, or Red Star ever could. Be that as it may, ad-man/uber-fan John Carbonaro licensed and eventually bought the rights (murky as said rights might have been–and remain to this day!) from original T.H.U.N.D.E.R. Agents publisher Tower Comics. His first T.A. project JCP Featuring T.H.U.N.D.E.R. Agents set comicbook fandom abuzz. Pulling together many of fandom’s top creators, guys like Chris Adames, Lou Manna, Mark Texeira, and Pat Gabriele, JCP Featuring T.A. was a black and white, magazine-sized comicbook featuring not only a brand new “preview story” featuring almost all of the T.H.U.N.D.E.R. Agents back in action, but reprints from the MLJ/Archie/Mighty/Red Circle line of comics, namely the Fly (by Joe Simon and Jack Kirby) and the Black Hood (by Neal Adams, Dick Giordano, and Gray Morrow). JCP Featuring T.A. was meant to be a sampler of what we could expect JC Comics to publish in their planned color comicbook line. 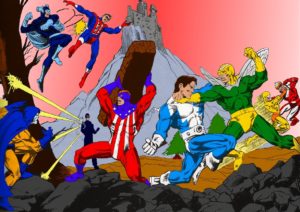 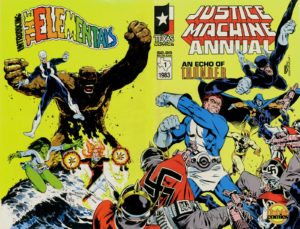 Somewhere along the way, Carbonaro went from licensing the MLJ/Archie/Mighty/Red Circle for his own publishing company, to partnering with Archie to bring back their Red Circle imprint, and all of the super-heroes from the MLJ/Archie/Mighty/Red Circle library…in addition to publishing the new adventures of the T.H.U.N.D.E.R. Agents. Carbonaro would edit the Red Circle line while Archie “silently” helped him publish the Agents under his JC imprint. Carbonaro’s number one priority was the Agents, while the Archie big-wigs, naturally, were more concerned about getting Red Circle up and running. That’s where the problems really began. (I warned you this was complicated stuff!) 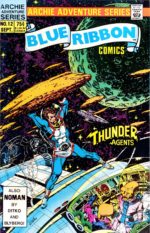 Carbonaro planned for a T.H.U.N.D.E.R. Agents/Mighty Crusader crossover to help create bigger buzz for both companies’ projects. The crossover was written and, according to Carbonaro, handed over to Rich Buckler (who had taken over as editor of the Red Circle line so Carbonaro could concentrate on the Agents), but the powers-that-were at Archie wanted Buckler to skip the crossover because, again, according to Carbonaro, he was already too far behind deadline-wise with the regular Red Circle books. A crossover did happen, though–with Noble Comics’ Justice Machine. In the legendary Justice Machine Annual #1, a Texas-based fanzine publishing company called Texas Comics got the rights to Noble Comics publisher Mike Gustovich’s Justice Machine and approached Carbonaro with their idea of doing a crossover between Justice Machine and the T.H.U.N.D.E.R. Agents. Carbonaro agreed that it sounded like a good idea and gave Texas the go-ahead. And as cool and important as that story might be (written by Bill Loebs with art by Bill Reinhold, Jeff Dee, and Bill Anderson), it was eclipsed by the back-up story by a new guy by the name of Bill Willingham. A little thing he called the Elementals, which went on to become one of the most popular titles of the 80s.

Still, in all of this confusion, Carbonaro and his associates were able to complete three issues of the new T.H.U.N.D.E.R. Agents and three issues of Hall of Fame before Archie’s priorities shifted completely to Red Circle, leaving Carbonaro and company high and dry. But wait, I said three issues of T.A., but only two were published, right? Well, in spite of all the changes in Archie’s handling their end of the T.A. deal, Carbonaro kept a decent relationship going with them. When Blue Ribbon Comics #12 looked like it was going to miss its deadline, Carbonaro worked out a deal with the Archie folks to let them publish the completed-but-abandoned third T.A. story–the story that would have been T.A. #3. 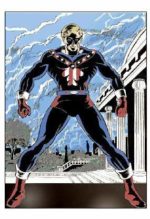 Despite the behind-the-scenes drama, the JC/Texas/Red Circle era of T.H.U.N.D.E.R. Agents produced some excellent comics. Carbonaro had a definite vision for the Agents, staying faithful to the Tower version while updating the strip for a new decade. He avoided “re-imagining” the Agents, bringing back the “real” characters fandom had fallen in love with back in the 1960s. Keeping the costumes, powers and characterizations intact allowed Silver Age fans to enjoy the JC take on the Agents, while fun stories and exciting art grabbed new fans and reeled them in. His choice of artists (especially Texeira, Manna, and Blyberg–oh, and that dude named Ditko wasn’ t bad, either…) were as good as anyone working at Marvel or DC at the time, and perfectly captured, then updated, the Wally Wood style. If the Archie connection had stayed strong, and Carbonaro and his compatriots had been allowed to strut their stuff for another three or so issues, JC Comics’ T.H.U.N.D.E.R. Agents could have been a huge hit, rather than another great, short-lived comic in the annals of “what might have been”.