From Newsarama, reprinted with permission 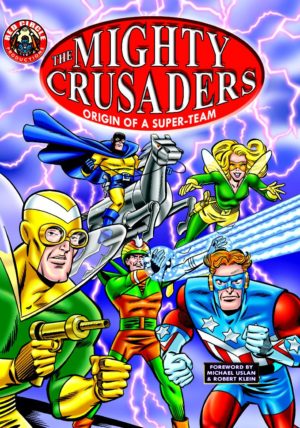 The people at Archie Comics plan to publish more high-quality collections of their difficult-to-find superhero comics of the 1940s, but don’t get the wrong idea – it’s a labor of love, not money.

Archie Comics is working on the second collection of adventures of Golden Age heroes including Steel Sterling, The Hangman, and The Black Hood, but it won’t be out before next year.

The only new superhero collection that will be out this year will be The Mighty Crusaders, which is not even from the Golden Age, but the Silver Age. It will ship Nov. 4 for $10.95 and will include the first appearances of the team from Fly-Man #31, 32 and #33 and The Mighty Crusaders #1. The stories were mostly written by Superman creator Jerry Siegel (though uncredited) and drawn by Paul Reinman.

More on the Crusaders later.

The folks at Archie want to open the vaults and re-package their huge collection of Golden Age material, but it’s expensive, time-consuming, destructive and might not sell all that well. 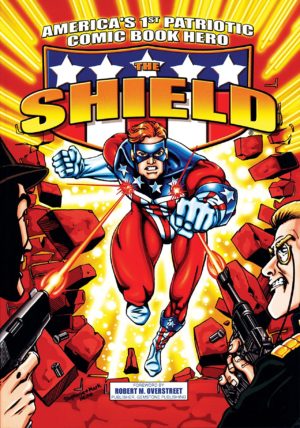 The Americana trade paperbacks are collections of various stories of Archie and his Riverdale pals and gals grouped together by decade or theme, like the Christmas stories. The sad truth is that there is a bigger market for those books than the superhero stuff.

Yeah but, if Archie won’t put out collections of characters like The Hangman, Steel Sterling, The Wizard, Captain Flag, Mr. Justice and dozens of others, no one will. “I know there are people out there who would love to see us repackage these books,” Gorelick said. “The people at Diamond Comics Distributors are always on our case to do it and we want to. But it’s an expensive proposition.”

Gorelick explained that in order to produce the collections, they must buy copies of the actual books, take them apart and process them. The color must be removed and then recolored. Of course, the comics are destroyed in the process and those comics are worth hundreds, even thousands, of dollars. Then there is the knottier problem of whether enough people are willing to shell out the cash for the works.

Archie exces are just not sure. 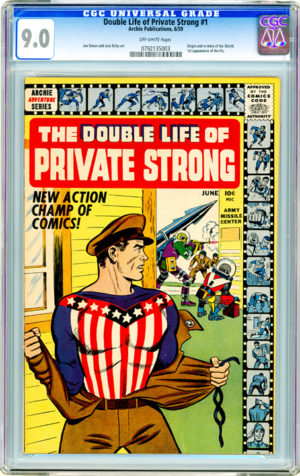 So they will be looking into it and testing the waters to see how much demand is out there. Gorelick said another project under strong consideration is the collection of the first silver age Joe Simon and Jack Kirby Archie super-hero, The Double Life of Private Strong from 1959. It was an updating of The Shield, in much the same way DC revived The Flash a few years earlier.

Frankly, Archie Comics could name its own price for a book of glossy, full-sized reproductions of those incredible Golden Age covers. Considering the success that DC and Marvel are having with their Archive and Masterworks editions, the fan market is out there. I think that Archie is thinking too small. Perhaps Archie should follow DC and Marvel’s lead and produce a hardbound book collecting a larger number of comics with a $40 price tag.

The higher price may be enough to justify the cost of the projects.

Back to The Mighty Crusaders compilation, I’m anxious to see it even though I know the work is pretty simplistic stuff. The new cover by Joe Staton will help.

Okay, let’s be honest. By modern standards, even by 1966 standards, the work is not that great. Grouping together a handful of characters as Archie’s answer to Marvel’s Avengers, even changing the name from The Fly to Fly-Man was little more than a sad effort to capitalize on the superhero revolution. Still, it was cool to see The Shield, the Black Hood, the Wizard, the Hangman, The Comet, The Fox, Steel Sterling, The Web again as the series progressed.

There was always potential with the characters and occasionally it was fully realized.

Which brings up the other issue: Collecting the Golden Age material could be an entrée back into the superhero market which Archie surrendered years ago. Considering Hollywood’s newfound appetite for superhero stories, it might spawn a new kind of franchise.

Michael Sangiacomo is a statewide news reporter for the Plain Dealer newspaper in Cleveland, Ohio. His syndicated “Journey Into Comics” weekly column on the state of the comic book business, can be found in newspapers and at the Newsarama website. His monthly comic book column appears the first Saturday of each month in the Plain Dealer Arts page and is syndicated through Newhouse Newspapers. He also writes a twice-monthly audiobooks review column covering crime thrillers and mysteries that can be seen at www.audiobookstoday.com. He currently is developing Nowhere Man for Marvel’s Epic imprint.

——-Original Message——-
From: Shield@MightyCrusaders.net
Date: Sunday, January 11, 2004 8:45:40 AM
To: mikesang@aol.com
Subject: Mighty Crusaders
Mike,
I would like permission to reprint your Mighty Crusaders section of Journey into Comics at www.mightycrusaders.netRik