Home » Uncategorized » You are reading »

I got a chance to catch up with Stan Timmons author on the ’80s Red Circle version of the Mighty Crusaders related line of comics.

Shield G-Man Club: You were born, raised, and still live in Lafayette, Indiana. What’s the best part of being a Hoosier?

Stan Timmons: Chicago and Indianapolis are within easy striking distance. And I’ve met some truly amazing people here. Granted, the most amazing one isn’t from here — hi, Ainsley! — but we love a lot of the same things and she’s decided I’m part of her family, as well as honorary grandfather to her son, Max.

SGMC: You went to Purdue University with a Bachelor of Arts in Journalism and a minor in Abnormal Psychology. Were you planning a career in comics? 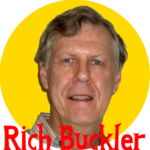 Stan: I probably did have it in my head that I wanted to do something in comics. There were several other occupations — maybe jobs would be more accurate — along the way, such as writing for the city paper (not once did the publisher bang his fist on his desk and demand someone “Get me pictures of Spider-Man!” which was a disappointment) and then advertising, which led to voice-over work in radio spots. During my time writing for the paper, I tried to slip interviews with comic book creators into the entertainment section, and one of the people I interviewed was Rich Buckler. 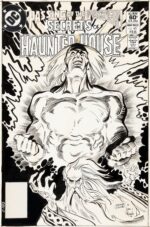 SGMC: Your first published comic work was for DC, Secrets of Haunted House #45. How did you break in at DC?

Stan: I actually tried to break in as an artist, and Rich Buckler took me up to the Marvel and DC offices where it quickly became apparent I was in no way ready to draw anything. Dave Manak, who was editing DC’s mystery line at the time, said they needed writers, and Rich said “Stan’s a writer.” Dave said he’d take a look at any spec scripts I turned in (and let me just take this moment to say Dave is one of the nicest guys you could ever meet, and I owe him a big debt of gratitude). On the subway back to Rich’s apartment, I asked him, “What am I going to write about?” and his response was “How should I know? You’re the writer.”

So I submitted a script — Mike Vosburg gave me the ending, so thanks, Mike! — and Dave called me a couple of very long weeks later and said he was buying the script and anything else I wanted to submit. 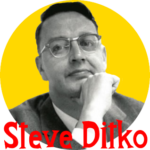 Stan: I never got to know Steve. In fact, I didn’t even know he was going to illustrate the story until Dave told me a few weeks after the fact. If I’d known it was going to be Ditko, I probably would have tried harder. I think the only time he ever even acknowledged my existence was at Red Circle when he told Rich he liked my script. Surprisingly, he wanted me to describe the art for the panels. When I first learned Steve was going to be drawing one of my scripts, I left the descriptions, kind of vague, figuring Ditko would know a lot better than I would how to compose the shot, but he didn’t like that. So, ever after, I made sure every little thing was detailed, and he always gave it to me. His work was always brilliant and beautiful. 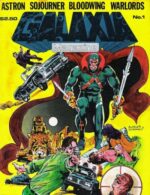 Stan: Galaxia was something Rich had been putting together for a while. It was also his chance to reclaim some of his characters. He had a Deathlok-type character named Killinger, and several other new ideas. This was the early days of the direct market, and I don’t know how good our distribution was. It’s possible nobody knew what to make of Galaxia, because we were definitely a mixed bag of concepts. 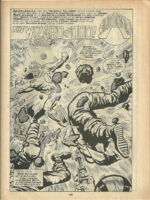 SGMC: You and Rich Buckler worked on The Wizard of Odd! together. How did you become a team? How did you split up the work?

Stan: Rich was always taking on apprentices and assistants. I think I arrived on the scene about the same time Mark Texiera was working with Rich, maybe getting ready to head out on his own. I basically arrived at the right time, and we shared a similar outlook on comics and storytelling, so it was an organic partnership. I’d pitch a story idea to Rich, and he’d make his suggestions, then I’d write it and he’d tweak it. 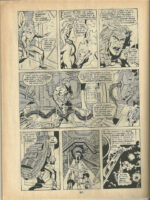 SGMC: The second issue of Galaxia was advertised, was it ever produced?

Stan: I think there might have been some scripts written, and maybe some pages drawn, but there was never a second issue, which is a shame. There was a lot of talent in that book, and Rich had a lot of ideas.

Stan: Next to nothing, but Rich had to hit the ground running and did his best to answer my questions and provide me with whatever reference he could find. 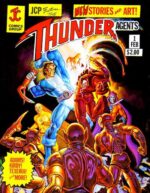 SGMC: I have a lot of questions about the start of the Red Circle line, I don’t know exactly when you joined.

This is what I know. John Carbonaro has Archie printing and distributing his JC Comics in December 1981 with JCP Features the T.H.U.N.D.E.R. Agents #1 and he reprints The Fly story “The Hide-Out” by Simon and Kirby as well as The Black Hood story “Life’s Not Like a Comic Book” by Gray Morrow, Neal Adams, and Dick Giordano. JC Comics is doing well enough that Richard Goldwater hires John to edit and relaunch the MLJ heroes. John is relaunching the Mighty Crusaders with Richard Buckler doing the story and art, The Fly with Jack C. Harris & Rich Buckler writing, James Shermann doing the art, and lastly Captain Strong with a story by Chris Adams and art by Paul Bonanno and Jon D’Agastino. After the first issue of Mighty Crusaders and Captain Strong is finished Richard Goldwater and John Carbonaro got in a fight which ended with John being fired and replaced by Richard Buckler. 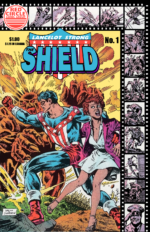 Stan: I don’t think I knew the whole backstory to the events that led to Rich taking over for John, although John had talked to me prior to that about writing some T.H.U.N.D.E.R. Agents scripts. I think John had his own vision for the characters and didn’t seem to be able to quite articulate it, so although creators might have come close to what John wanted, it wasn’t entirely on the nose, so that would lead to John rejecting it. I do know things were getting close to the launch date for the MLJ line and there wasn’t much, if anything, ready to go, so Rich called me in at the last minute to write a few titles.

SGMC: You co-wrote Lancelot Strong, the Shield #1, and #2, which is my favorite part of the Red Circle run. Was anything used from the prior Captain Strong issue or was that scrapped completely? 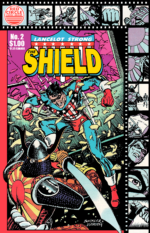 Stan: It was all scrapped. I don’t think I even knew anything had been done before I got the title. Now I’m curious. I kind of want to see the previous stuff.

SGMC: What were you told to do with the character?

Stan: I don’t remember any specifics, other than try to stay true to what Simon and Kirby did, but make it modern. But, y’know, no pressure.

SGMC: Why did your run end with issue #2?

Stan: Office politics, basically. We had a script written for #3 that in no way ended with Lancelot Strong dying. 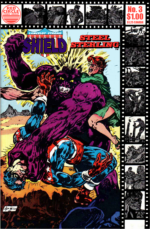 SGMC: Do you know why they killed off Lancelot Strong in issue #3?

Stan: That was such a bad idea. The only thing I heard about that was Robert Kanigher didn’t like the character. I was also told he didn’t care much for superheroes, in general.

SGMC: You also worked on the Black Hood, Fly, Fly Girl, The Fox, Jaguar, Steel Sterling, and the Web. What type of research did you do on these characters?

Stan: So much of that was learning as we went. Rich didn’t know a great deal about the characters, and I think Archie didn’t have a very complete set of back issues for us to reference. I got a few Xeroxes, and I think Rich might have talked to Roy Thomas about the rest. At one point, Rich said he was talking to Roy about teaming up to do a series set in WWII called the Mighty Legion of Justice. We had so many great things planned. 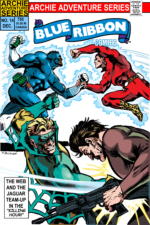 SGMC: Which characters did you like working on the most?

Stan: When I was a kid, my older brother had some issues of The Jaguar and Fly, so I knew a little about them and really enjoyed the chance to work on them, and the teaming of The Web and Jaguar for Blue Ribbon was going to be the start of — I guess — what would have been our World’s Finest, but we never got that far. I enjoyed working on all of them, but my favorite remains Lancelot Strong. 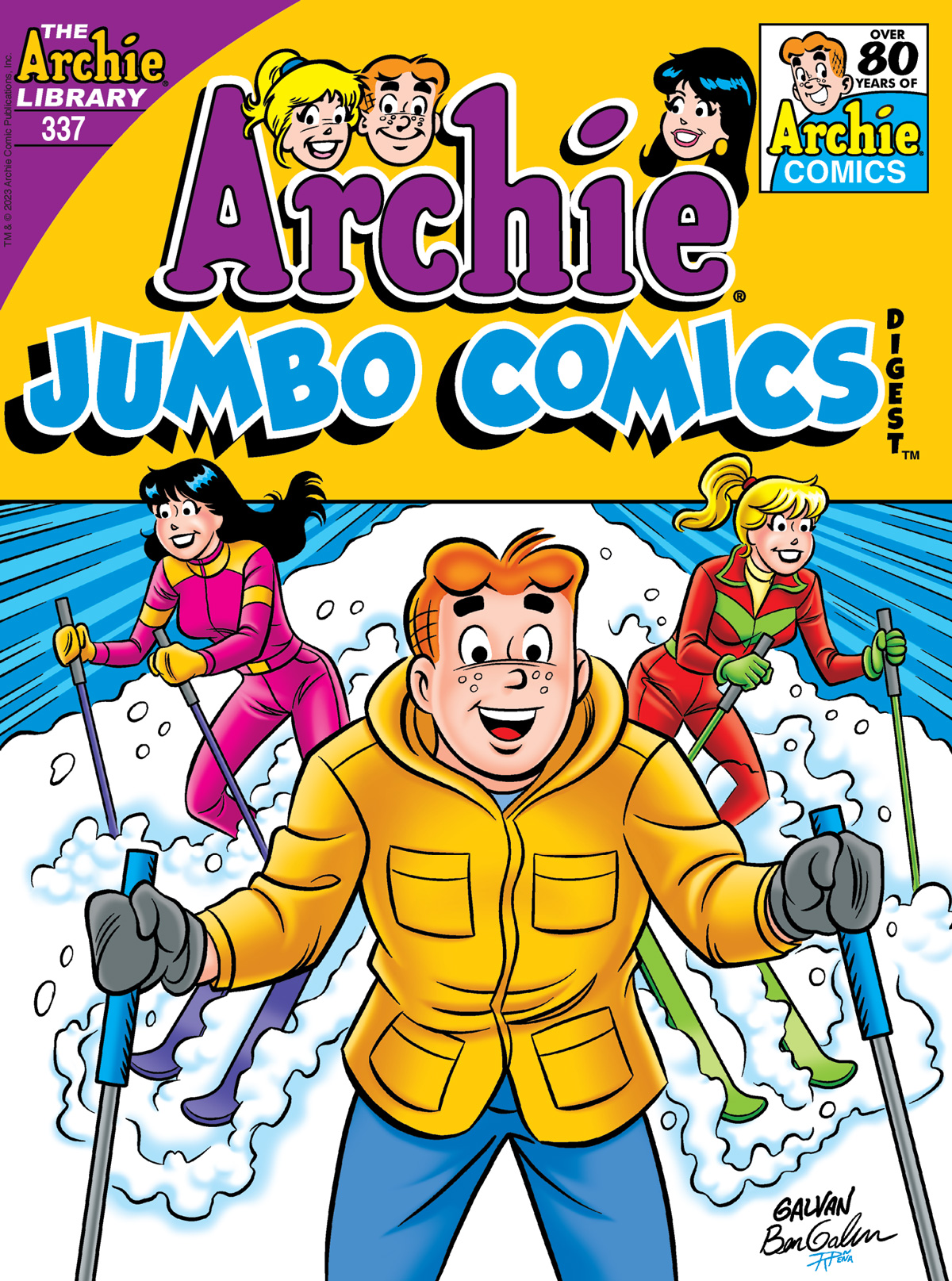 FANZINE #6: How a Mighty Crusaders Movie Would Work