EVERYTHING YOU EVER WANTED TO KNOW ABOUT RED RUBE AND MORE 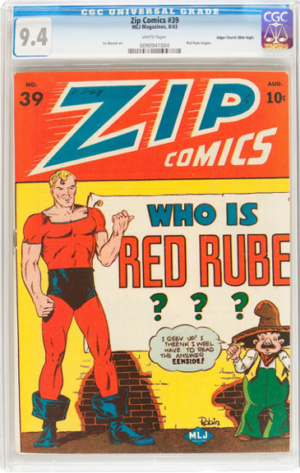 Steve Ditko once said, “We all stole from each other” and nothing proves that point better than Red Rube.

Red Rube was a short-lived feature in Zip Comics that replaced the Web when interest waned. Editor Harry Shorten hired Ed Robbins to create the MLJ Superman as a comedic superhero. MLJ Comics was big on non-powered masked mystery man but short on superpowered heroes. Ed Robbins had been working on the Wizard portion of Shield Wizard Comics, and had previously worked for C.C. Beck at Fawcett Comics on Captain Marvel and Mary Marvel. He combined aspects of the Marvels with the name “Red Rube” taken from the lead character in the film “The Redemption of Red Rube” and with a figure from the Alex Ramond movie poster for Academy Award Nominated Best Picture Captain Blood starring Errol Flynn.

Red Rube was the last Golden Age superhero created at MLJ Comics, he was the end of the first heroic era at the company that would become Archie Comics.  In the Silver Age, Archie Comics revived all their Golden Age heroes, most notably in Mighty Crusaders #4’s “Too Many Heroes“. Only two heroes didn’t make the cut, Red Rube and Mr. Satan. While Mr. Satan may have had some trouble with the Comics Code Authority, there is no apparent reason why Red Rube wasn’t included. Furthermore, neither Red Rube nor Mr. Satan were ever published again, causing them to have the distinction of being the only MLJ superheroes to fall into public domain. 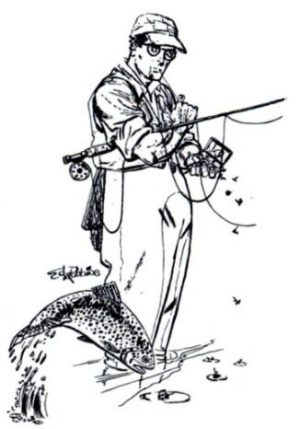 Self Portrait by Ed Robbins

But who was Ed Robbins?
Robbins attended the Pratt Institute, a private university in Brooklyn, New York, The Corcoran School of the Arts and Design at George Washington University, in Washington, DC. and the Art Students League of New York. While attending the University at age 20 Robbins started in comics by sending samples to Lloyd Jacquet at Funnies Inc. in 1939 and landing a job. Three years later, in 1942 he was hired for $50 a week by C.C. Beck to work in the Fawcett art department including working on Captain Marvel and Mary Marvel as the layout artist. This was a non-exclusive arrangement and allowed Robbins to freelance for MLJ Comics on the Wizard section of Shield Wizard Comics. Even when Robbins was drafted and served in the armed forces and continued to freelance for Fawcett while in the service. Upon discharge, he went to work for Timely Comics and worked on the All-Winners Comic among other titles. Robbins would continue to freelance for nearly all the big comic publishers from the 1940s to the 1970s. He worked for Archie Comics, Atlas, Centaur, DC Comics, Gold Key, Marvel, MLJ Comics, Stanmore Publications, Timely, and Warren. Robbins also worked on the syndicated newspaper strip Mickey Spillane’s Mike Hammer from the Phoenix Features Syndicate. Robbins left comics and managed a Real Estate Firm later in life. 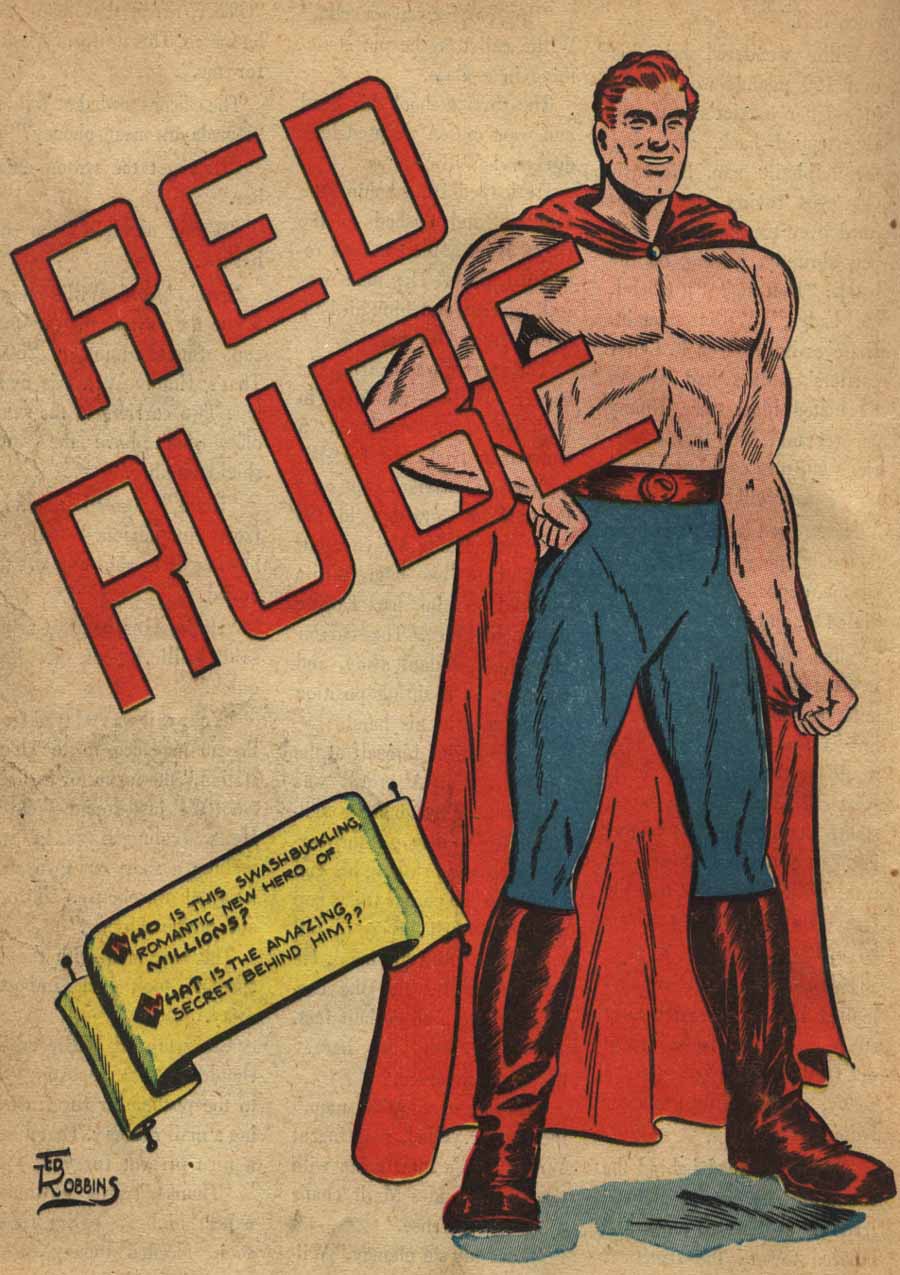 Red Rube has an odd look by today’s standards, but the Golden Age is filled with shirtless comic characters, the most notable being Timely Comics Namor and DC Comics, Hawkman, Centaur Comics Amazing Man, MLJ Comics already had the shirtless Doc Savage. 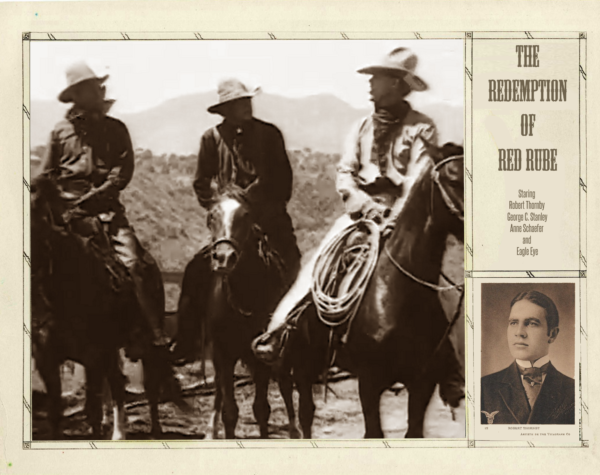 “The Redemption of Red Rube” was a western film from 1912, the plot is as follows…
Hurriedly making preparations to go in pursuit of “Red Rube,” the outlaw, who has broken jail, Sheriff Sanders is accosted by “Spotted Snake,” an Indian from the reservation, who enters his shack and abusively demands whiskey. The sheriff promptly kicks him out. The Indian swears vengeance. The sheriff takes leave of his wife and little child and starts after “Red Rube.” After his departure, “Spotted Snake” returns to the sheriff’s shack and orders Sanders’ wife to furnish him with liquor. At the point of a rifle, she orders him off. As he leaps upon his horse, he snatches up the sheriff’s little girl and rides rapidly away into the desert with her, where he leaves her to die. At Silver City, Sheriff Sanders catches up with “Red Rube.” In the “Silver King’s” saloon, “Rube” shoots the sheriff in the arm and flees, followed by a posse of enraged citizens, determined upon lynching him. “Rube” makes his way across the desert and comes upon the sheriff’s little girl wandering aimlessly about. He knows that shooting the sheriff means lynching for him if he returns to “Silver City.” The confidence of the child in him and her evident dependence placed upon his power to save her, touches his heart, and he decides to square up his career by returning the child to her parents and taking his medicine like a man. The sheriff is carried to his home, where his distracted wife tells him of the kidnapping of their child. The report is spread and the neighbors gather at Sanders’ house to organize a searching party. While they are considering what course to pursue, “Red Rube” rides up and places the child in its mother’s arms and surrenders himself to the sheriff. Immediately the neighbors form a Vigilante Committee and propose to lynch “Red Rube,“. In spite of the sheriff’s protests, they slip a rope over his head. The rescued child lifts her arms to the unfortunate man and he clasps her tenderly to his breast, while she hugs and kisses him, then she lifts the rope from his neck and casts it aside, pleading mercy for her rescuer. “Red Rube” hangs his head at the child’s simple faith and trust in him. The neighbors silently steal away with tears in their eyes. The sheriff clasps the hand of “Red Rube” in gratitude.
The film was directed by Rollin S. Sturgeon
Staring Robert Thornby as Red Rube – the Outlaw
George C. Stanley as Sheriff Saunders
Anne Schaefer as Mrs. Saunders – the Sheriff’s Wife
Eagle Eye as Spotted Snake – the Indian 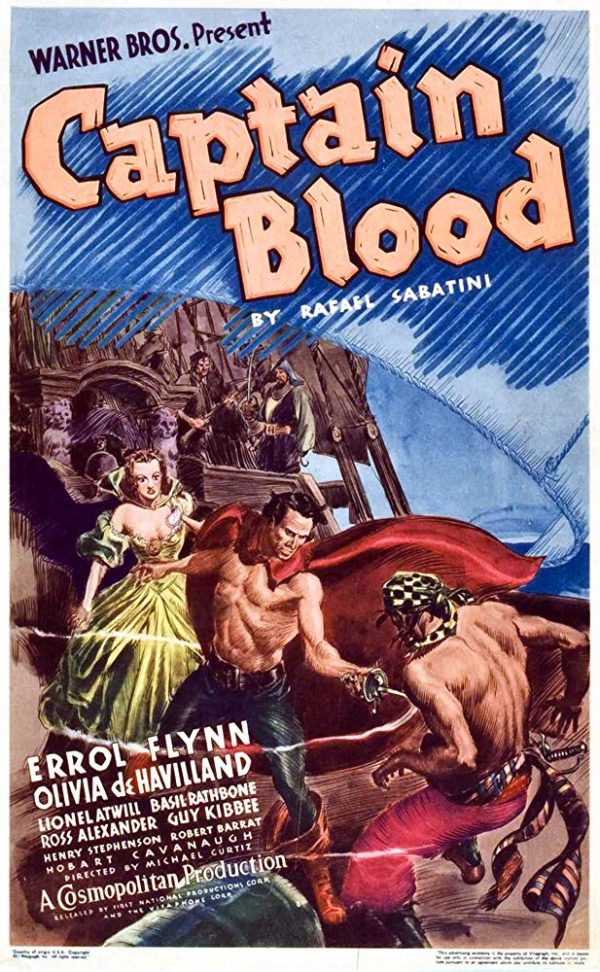 Next, we mix in Captain Blood. This is clearly more of a swipe then an homage.
Captain Blood was a pirate film from 1935, the plot is as follows…
Arrested during the Monmouth Rebellion and falsely convicted of treason, Dr. Peter Blood is banished to the West Indies and sold into slavery. In Port Royal, Jamaica the Governor’s daughter Arabella Bishop buys him for £10 to spite her uncle, Col. Bishop who owns a major plantation. Life is hard for the men and for Blood as well. By chance, he treats the Governor’s gout and is soon part of the medical service. He dreams of freedom and when the opportunity strikes, he and his friends rebel taking over a Spanish ship that has attacked the city. Soon, they are the most feared pirates on the seas, men without a country attacking all ships. When Arabella is prisoner, Blood decides to return her to Port Royal only to find that it is under the control of England’s new enemy, France. All of them must decide if they are to fight for their new King.
The film was directed by Michael Curtiz
Starring Errol Flynn as Peter Blood
Olivia de Havilland as Arabella Bishop
Lionel Atwill as Colonel Bishop
Basil Rathbone as Levasseur 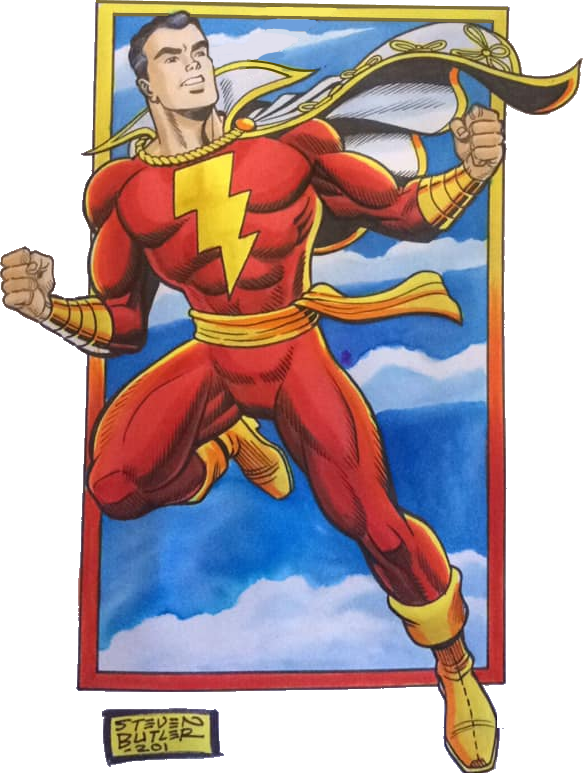 The final element was Captain Marvel who Robbins worked on at Fawcett
Billy Batson, a kid radio reporter for station WHIZ, can call upon the powers of six “immortal elders“: Solomon, Hercules, Atlas, Zeus, Achilles, and Mercury by simply shouting “SHAZAM!”, which causes him to turn into the all-powerful Captain Marvel.
Captain Marvel was given a magical gift, whenever he shouts “SHAZAM!” he is transformed from a child into an adult Super Hero. Billy is an orphan who lived on the streets, Billy rode a magic subway car to a mysterious location. There an old man gave him a magic word that put him in touch with immortal elders. Each Immortal gave him an aspect of their greatness, together it made him superhuman. 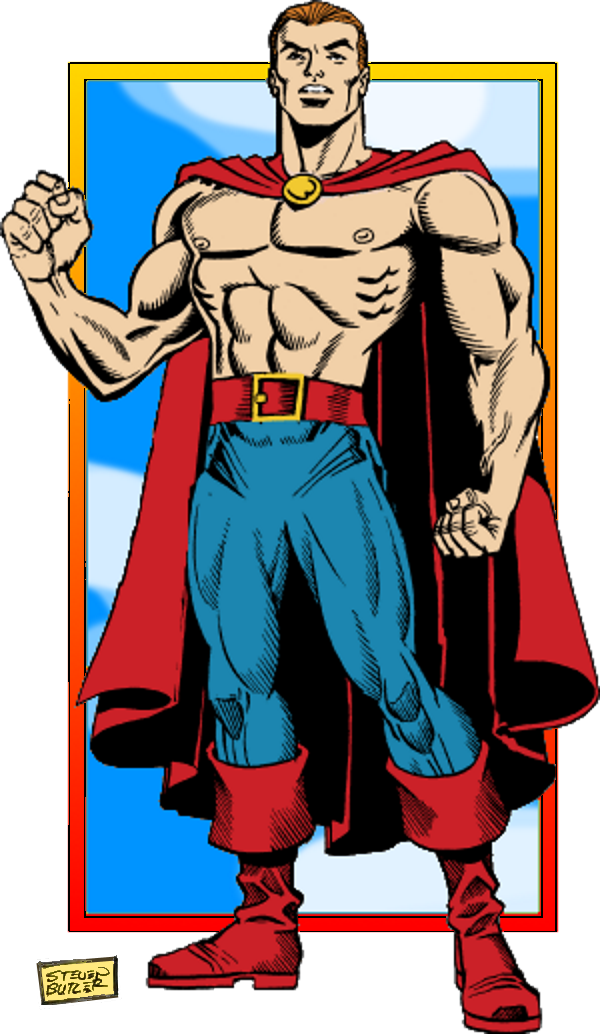 This all leads to Red Rube.
Reuben Reuben, a cub reporter for the Daily Sun, can call upon the powers of his ancestors by simply shouting “Hey Rube”, which causes him to turn into the all-powerful Red Rube.
Red Rube was given a magical gift, whenever he shouts “HEY RUBE!” he is transformed from a child into an adult Super Hero. Reuben is an orphan who ran away from the orphanage and hid in a Castle on top of a nearby hill. There an old man gave him a magic elixir that put him in touch with his ancestors all of whom were also named Reuben Reubens. Each relative gave him an aspect of their greatness, together it made him superhuman. 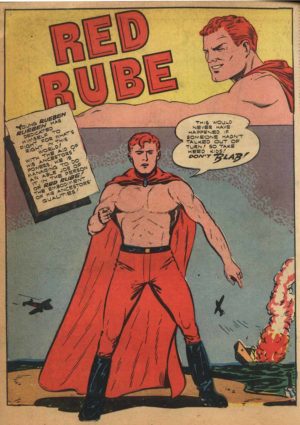 Real Name Rueben Rueben
First Appearance Zip Comics #39 (1943)
Created by Ed Robbins
Origin Rueben Rueben was a young orphan who ran away from the orphanage. He hid out in an old castle but discovered it was his ancestor’s home. His ancestors still haunted the castle as ghosts, all sharing the same name as their descendants, and wanted to help him.
Rueben later became a cub reporter for the Daily Sun.
Powers and Abilities The ghosts each gave him the powers they possessed in life: strength, wisdom, speed, invulnerability, and courage. All he needed to do to use these powers was call out “Hey Rube” and he would transform into Red Rube, a fully grown hero.
Appearances
Zip Comics #39-47
Roly Poly Comics #10 – Canadian version
Weekender vol. 1 #1, 3 – Canadian cover only 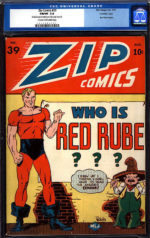 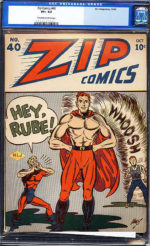 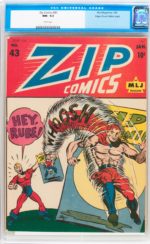 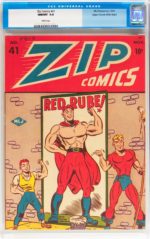 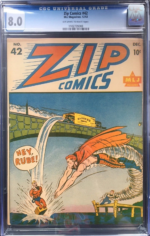 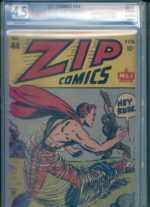 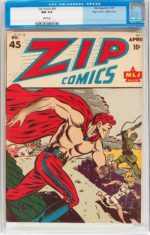 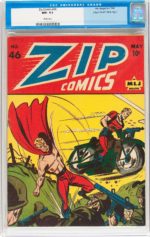 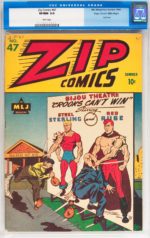 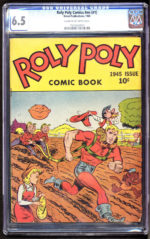 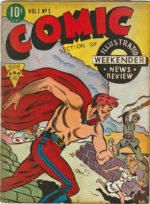 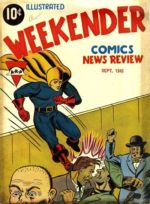