AGENT SHIELD
Created by: Rik Offenberger
Real Name: Simon N. Kirby
First Appearance: Agent Shield #1, June 2018
Origin: Kirby is a third-generation FBI Special Agent with five years of service to the Bureau. He specialized in organized crime and has done some undercover work, infiltrating, and arresting members of, hate. groups. Agent Kirby was assigned to head the Ultra Agent Program, which included suiting himself up as an ultra-hero and actively registering ultra-heroes as well as calling upon them as needed to police the ultravillains, keep them in line and bring them in when they cross the line. 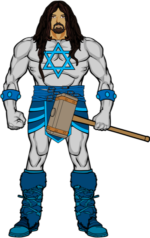 JUDAH “the Hammer” MACCABEE
Created by: Rik Offenberger
Real Name: Judah Maccabee
First Appearance: Agent Shield #32, December 2018
Origin: Judas Maccabaeus was the third son of Mattathias, a Jewish priest. Together with his sons, Mattathias led the Maccabean Revolt for religious freedom when King Antiochus IV Epiphanes of the Greek-Seleucid Empire made Hellenism the only legal religion. Judah  Maccabee, named for his forefathers, is the latest wielder of the Hammer from GOD. He has spent his entire life in the study of his religion, and since birth, he has been on a mission to protect his people. It is his calling.

CHAMPION OF LIBERTY
Created by: Jim Burrows
Real Name: Captain John Steele, USN
First Appearance: Super*World campaign Maynard Massachusets, 1983
Origin: Capt. John Steele was a young fighter­ aircraft certified US Navy pilot. When he was badly injured, detailed blood and genetic screening revealed that he had a genetic marker that was known to be associated with very positive reactions to the so-called ‘Ultra Soldier” serum. Therefore, he was subjected to an enhanced version of the treatment, resulting in unprecedented levels of strength, speed, agility, and stamina. Capt. Steele was transferred into the Navy’s unit of X-COM, the Joint Extraordinary Operations  Command, using the call sign ”Sentinel”. X-COM supplied him with a state-of­ the art suit of Kevlar-derived body armor and powered gauntlets. Initially, Sentinel was used only in official, at times covert, military operations. However, in response to the growing ultra-human threat, he was given the public ultra-hero identity of the ”Champion of Liberty ” and a new call sign of ”Champion”.

CHAMPION OF LIBERTY 2
Created by: Jim Burrows
Real Name: Captain John Steele, Jr. / Jack O’Neil
First Appearance: Agent Shield #82, August 2019
Origin: Jack is the son of John Steele, Sr., the original Champion of Liberty. He was brought up by his single mother, Rose O’ Neill, without his father’s knowledge. Young Jack was a high-school dropout, thief, and hacker. Convicted of hacking federal computer systems, Jack was sent to FCI Petersburg. There, he was recruited by the FBI to spy on his fellow inmates. When he was released, he continued working undercover. Eventually, the Bureau revealed to him who his father was, treated him with the ”Ultra Soldier” serum and gave him his father’s uniform & powered gauntlets. He then assumed the identity of the second Champion of Liberty & the name John Steele, Jr.

OPERATIVE: DESERT SHIELD
Created by: Joe Sewell
Real Name: Dire AL-Sahrah
First Appearance: The !mpact of the Shields, Dec. 18, 2018
Origin: Not much is known about Operative: Desert Shield. He appeared during an operation of US ultra-agents in a Middle Eastern desert, where he was protecting the underground bunker of the mysterious, figure known as the ”Major of the Sands.” Later, he engaged an Isreali team led by Judah ”The Hammer” Maccabee, during which he mentioned his family. While his motivations remain unclear, his comments suggest that he may have been coerced into the Major’s employment to protect his family. 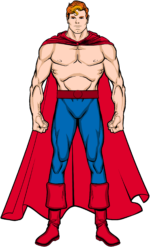 RED RUBY
Created by: Ed Robbins
Real Name: Reuben Reuben
First Appearance: Zip Comics #39, August 1943
Origin: Reuben Reuben was an orphan who ran away from the orphanage and hid out in a castle on top of a nearby hill. There, he encountered an old man who gave him a magic elixir that put him in touch with several of his ancestors, who were all named Reuben Reuben. Each gave him an aspect of their greatness. Together, they made him ultrahuman. When he calls out the traditional carney battle-cry of ”Hey Rubel”, the boy is transformed into the adult Red Rube. Rueben lives on his own and is a cub reporter for the Daily Sun.

RED RUBY
Created by: Jim Burrows
Real Name: Rachel “Ruby” Reuben
First Appearance: Agent Shield #67, April 2019
Origin: Rachel is the younger sister of Reuben Reuben, alias ” Red Rube”. When their parents died, Reuben and Rachel were placed in separate orphanages. As a teenager, Reuben found his way to a castle inhabited by the ghosts of his ancestors, who magically granted him the ability to transform into an adult with ultra-powers when he calls out the carney battle cry ” Hey Rube!” When Rachel was ten, they were reunited and she learned his secret and found that she, too, could use the cry to transform.

SGT. FLAG
Created by: Rik Offenberger
Real Name: Rob McFarlane
First Appearance: Agent Shield #59, February 2019
Origin: Rob McFarlane is a sergeant in the US Marine Corps. He joined the United States Marine Corps Forces Special Operations Command (MARSOC) the day he graduated from high school and was stationed with the 3rd Marine Raider Battalion in Camp Lejeune, North Carolina. He strongly believes in ”No Man Left Behind” & has become a one- man extraction team. While most combat troops try to dress in camouflage, Sgt. Flag drapes himself in the colors of the Sgt. Flag is the Hammer of Justice.flag to stand out and be seen by the troops he is trying to save. When you need a hammer, he is there to save your ass. Semper Fi Mø†#≡Γ Fμ¢κ≡Γ. 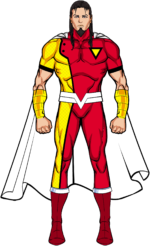 STEEL WOLF
Created by: Eric N. Bennett
Real Name: Alexi Mikhailovith Krylenkov
First Appearance: Superiors #2 October 2016
Origin: The grandson of the famed World War II hero who shares his name, Steel Wolf underwent a process to duplicate the circumstances of his grandfather’s empowerment. Given a colorful costume, and assigned to be Russia’s representative to the United Nations’ First Guard task force, Steel Wolf earned a reputation as the greatest defender of the world as a whole. Steel Wolf also serves as a member of an interdimensional group of heroes charged with defending the multiverse. During his time with this group, while exploring an as-yet­ unidentified dimension, he was transported to Agent Shield’s Earth. After introductions and explanations, the heroes shared an adventure together before Alexi returned to his own world.