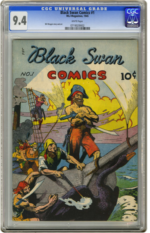 Canada was an independent country at this point, but many still felt a strong kinship with the British Empire, and thousands of Canadians immediately joined the armed forces to fight on behalf of the motherland. September 10, 1939, Canada declared war on Germany.

With the country quickly shifting into wartime mode, the federal government created new agencies to oversee such war efforts as munitions manufacturing, propaganda control, and the rationing of natural resources. On September 15, 1939 the Foreign Exchange Control Board was established to oversee the rationing of foreign currency, It was in charge of monitoring Canada’s international trade. Throughout 1940, its members grew concerned by Canada’s growing trade deficit with the United States, still a neutral country at this point, the United States would not enter the war until after the Japanese attack on Pearl Harbor on Dec. 7, 1941. 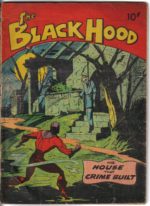 December 1940, as Canada’s trade deficit with the United States grew, and British gold shipments were curtailed, government intervention in the economy broadened with the introduction of the War Exchange Conservation Act. Aimed at countries outside the sterling bloc; sterling bloc countries traded heavily with England and kept their currency at parity with the English pound, it was primarily designed to conserve United States dollars by restricting the importation of non-essential goods.

Those “non-essential” items meant practically anything that couldn’t be converted into weapons and ammunition. Among the items banned, including comic books. Companies that used to publish Canadian comics, called Canadian Whites, because they were mostly black and white, began importing printing plates from the U.S. and printing the comics in Canada for the Canadian market. These comics weren’t published in any particular order, nor were they often exactly the same as the US editions. 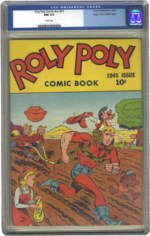 One of the new Canadian Pulp Magazine Publishers, Science Fiction, stated: “By the purchase of this periodical, you are giving Canadians employment, Canadians who are paying taxes, buying War Savings Certificates and Victory Bonds, doing their bit to preserve a free Canada and to maintain our prosperity … Ours are truly All-Canadian magazines, conceived, edited and written in Canada by Canadians, spending our currency among ourselves, adding to our country’s business. They ARE NOT printed-in-Canada editions of inferior American magazines, which freeze the Canadian money spent on them for after-war profits and which do not build native industry.”

However, all of the stories in the Canadian Pulp, Science Fiction, were original printed in the United States, they including stories from Louis Silberkleit, Martin Goodman, and Maurice Coyne’s Columbia Publications, Future Fiction.

Canadian publisher would also buy American scripts from publishers, including MLJ Magazines, and then have a Canadian artist re-do the artwork. Anglo-American Publishing had such an agreement with Fawcett. This lead to some interesting Canadian versions, including Commander Yank, a patriotic American hero, fought his Canadian adventures with a British Union Jack, Canada’s official flag at the time, on his chest. Citren News Co. of Canada, did the same with the Shield, when they re-drew copies of Pep Comics for the Canadian audience. The Canadian versions of Pep Comics were sold under the title Super Comics. Citren had apparently purchased these stories second hand from Pershing Square Publishing’s subsidiary Green Publishing. 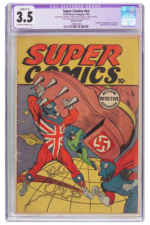 F.E. Howard took over the publishing of Super Comics with volume two. Most issues were printed with blank inside covers, no indicia, copyright or trademark information was present. Super Comics, Volume 2, Number 5 included “Published monthly by F.E. Howard Publications Ltd., 7 Wellwood Avenue, Toronto, Ontario, Canada.” and that was unusual for Canadian Comics of that time period.

F.E. Howard, also published an Archie Comics one shot, which reprinted the contents of Pep Comics #49. No reference to MLJ Magazines is made and the MLJ logo on the cover is replaced with a FEH logo. Again inside covers are blank, no indicia, copyright or trademark information was present. There are only 5 know copies of F.E. Howard’s Archie Comics one shot left in existence. 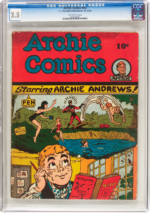 William Zimmerman’s Superior Publications, also jumped on the MLJ bandwagon with the publication of Three Ring Comics, published in Toronto from their Century Comics division. Three Ring Comics was interesting in the fact that it had a cover featuring a re-drawing of Pep Comics #22, yet featured an interior of only funny animal comics. This comic was printed in Canada for limited distribution in the United Kingdom. There is only one know copy in existence.

After the war, United States based publishers resumed distribution in Canada. F. E. Howard, began distributed in both Canada and the United States. However, American competition proved too overwhelming and he was driven out of business.

William Zimmerman’s Superior Publishers, not only survived the transition, but also began publishing and received distribution in the United Kingdom. Superior dominated the Canadian comic book market from 1947 until 1956. In addition to using its own name, Superior published under four different imprints: Century Publishing, Herald Printing, Duchess Printing and Randall Publications. In addition to distributing in the United Kingdom Superior also entered the United States market. Superior was among the leading reprint firms by the end of 1948. Superior was the only publisher to survive the import deluge of 1951. Superior finally went out of business in 1956.