THE IMPACT OF THE LEGEND OF THE SHIELD

In July of 1991 DC Comics brought out a new publishing line, an entirely different, separate, distinct universe from the one they had brought together after Crisis on Infinite Earths. This line featured a new set of heroes. I can’t say I was familiar with them, and this was long before the days of Google. Still, I had heard of one of the characters: The Shield. I didn’t know back then that he had started out as a hero the year before Captain America was introduced, and I certainly didn’t know that Cap’s iconic discus shield was due, in part, to this earlier hero. I did know one thing, though: I loved the whole line, and Legend of the Shield stuck with me, even after the line was canceled in December of 1992. I’m not sure whether it was an issue with my local comic shop or the death of my father or what – 1993 was a significant year for me – but I completely missed the attempted rebirth, but overall total mishandling, of the line with the Crucible event.

The series had a little bit of everything. A soldier is blackmailed by his own military father into testing a suit of armor based on one that had been left behind. The soldier must deal with doing good, obeying orders, and dealing with some serious dirt. He goes AWOL, stealing the “rig,” and deals with even more dirt, including a mysterious cyborg who seems to have a connection to the project. Bubbling under the surface is the mystery of what happened to the original Shield. It all comes to a head, things get resolved, but the soldier, Joe Higgins, is forced to leave his rig behind, giving it to the “runner-up” in the contest for the honor of wearing the suit. The new guy, Stephen Barnes (misnamed Michael Barnes in one place), might not have what it takes. He seems to meet his end, and the two veteran Shields must complete the mission.

And then everything goes “boom.” Higgins, along with most of the other Impact heroes, disappear in what appears to be a teleportation accident. End of the line … at least until Crucible appears. That title jars the reader into some new territory, with a few survivors of the end of the Impact line, and some newcomers, successors, and so forth. One surprise is the American Shield, who turns out to be a severely injured but otherwise living Barnes. The focus of most of the miniseries is on the Comet, a hero who discovers he’s really an alien duplicating the body of a kidnapped Earthman, and the slide into insanity. Not what I call a glowing treatment of the hero, but there you have it.

The comic book buyers weren’t going to have that, though. While there are a few bits of surviving work for what would’ve become the new Impact line, everything ended there. The final page of Crucible appears to be a rushed finale that was more of a washing of hands than a serious farewell. It also left way too many questions unanswered.

Back in those pre-Internet days, we had CompuServe and America Online (AOL). They had forums for discussion. I was quite active in the Comics forum, performing one of my favorite tasks: cleaning up messes others left behind. Some called me a “continuity janitor.” There was no shortage of need for such things after Crisis, and ever since then. I lost interest in that, and eventually in comics altogether. I sold off my collection in the process of moving, discovered that I just didn’t have the time or the money to keep it up, and a total lack of interest after Flashpoint, New52, and Brand New Day.

Eventually, to make an already long story a little bit shorter, I ran into Rik Offenberger and his connections with The Shield. His Mighty Crusaders site and his book, The MLJ Companion, gave me not only the background I had missed but a renewed interest in my favorite characters. I managed to get replacement copies of Legend of the Shield as well as Crucible and became inspired. Rik’s site has unfinished art for the first issue of American Shield, but nothing much was said about the first two Shields in the Impact line.

I wasn’t going to stand for that! What happened? Why did that handshake deal at the end of Crucible not appear in American Shield? Besides, I wasn’t too happy with a few things in those two titles. So, I changed it.

I wrote the first chapter of a fanfic continuation of the story, The Impact of the Shields. My plan was to bring back, or at least demonstrate what happened to, the original Shields, carefully working around the bits in Crucible I didn’t like and incorporate a few other things I wanted to incorporate. I have a long-term plan that, honestly, I don’t want to spoil in this fanzine article. I’ve gotten to issue 10 of the series, and really owe my fans (both of them ) issue 11. Things should really start to get interesting in an issue or two, with several reveals, a few nods to what went before, and some other goodies. 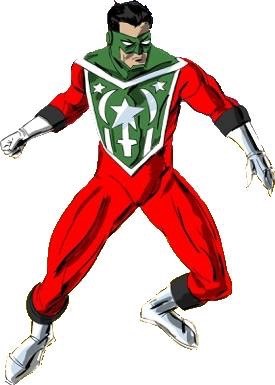 One creation that came out of this was a whole new character. Inspired by a bit of the classic Canadian Shield (reworked classic Shield stories with the main character sporting the Canadian Union Jack, their flag at the time), Batman, Inc., and my work life, as well as one of the secrets I haven’t revealed yet, I came up with a new character that could be hero or villain. (Okay, by now it looks like he’s not doing this 100% voluntarily.) Thanks to my first commissioned artwork, done digitally and delivered online by Jay Piscopo, The Shield went international. A Middle Eastern fellow, Operative: Desert Shield, showed up. I didn’t want to make him wholly “evil Muslim tyrant,” but the star and crescent motif is prevalent in that area. Taking inspiration from some of the flags of Middle Eastern countries, I gave Jay a rough sketch of the chest emblem, and what he produced was fantastic! (The full art includes the other Impact Shields surrounding him. Jay made sure the threat, or lack thereof, was ambiguous.)

You can go to Rik’s site, mightycrusaders.net, and look in the forums for my fanfic, or pull the pieces together from one or two Facebook groups. Desert Shield has taken on a life of his own, though. Rik has his own series of covers about his own variant of the hero, Agent Shield, and no fewer than 3 other artists have drawn Desert Shield since then. He’s even a part of Rik’s “G-Man Universe” Who’s Who volume. At one point it even inspired an Israeli version, Magen, alongside Judah “The Hammer” Maccabee. Magen quietly disappeared from the G-Man universe, but he did pop up in Impact of the Shields. (Plans? Did somebody mention plans?)

I’d probably be fired if I were doing this for pay (or I changed my name to Grant Morrison) because life and fatigue has produced speed bumps with my writing. I’m surprised these words are flowing as easily out of my fingertips as they are. Still, it’s fun! This has taken me down a road I never dreamed I’d go. Yeah, I’ve written fanfic before, as well as some other things along the way, and I’ve got more I want to write. To discover how crazy popular this has become, though, still makes my jaw drop.