Home » MLJ MAGAZINES » OTHER MEDIA » Radio » You are reading » 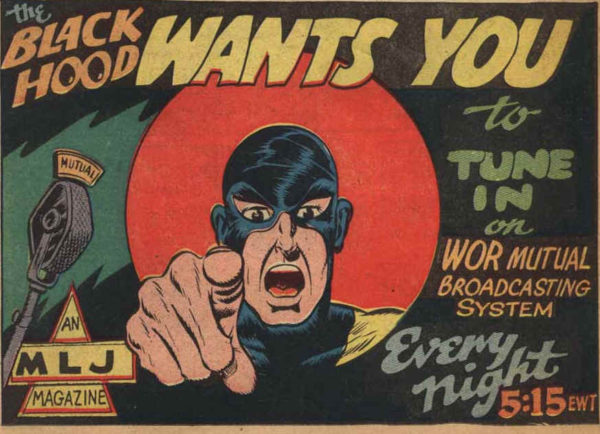 After three years in the comic books, The Black Hood debuted on network radio on July 7, 1943, on the Mutual Broadcasting System (MBS.) It was a sustaining (non-sponsored) series and aired its 15-minute episodes five times weekly until it went off the air in January 1944, having failed to pick up an advertiser. Two then unknown, but competent, radio performers played the leads: Scott Douglas portrayed The Black Hood and Kip Burland, while Marjorie Cramer was the voice of his girlfriend, Barbara Sutton, usually called “Babs.” Radio standards of content were more stringent than the pulps and the comic books, so radio’s Black Hood had less violence in his stories, and bondage and torture were eliminated. A supporting character in this radio series, Sergeant McGinty of the local police, was the third wheel to the crime-solving accomplishments of Kip and Babs. The theme music for this radio program was a curious choice: the “water bucket” segment from “The Sorcerer’s Apprentice” composed by Paul Dukas in 1897, but certainly recognizable to juvenile listeners as Mickey Mouse’s scene in Disney’s 1940 film “Fantasia.” While approximately 120 episodes of The Black Hood were aired on Mutual, only one audio copy has survived, the initial episode which was recorded as the audition disk.

[ Source: Jack French, author of “PRIVATE EYELASHES: Radio’s Lady Detectives”, published by Bear Manor Media, which contains more information on this radio series (and 43 others.) For information, go to the publisher’s website at www.bearmanormedia.com]

A transcript of “Black Hood: Emerald Voodoo Ring” is listed below

Both Audio and Transcript provided by Brad

Scott Douglas, coincidentally, also played the part of the comic book character Batman in an audition show, The Case of the Talkative Seal, which was recorded in 1943. The show presented a somewhat different version of the Batman character and did not make it to the airwaves.

From the internal evidence, The Black Hood was on from 5:15 p.m. to 5:30 five days a week — Monday through Friday, and most likely a sustainer, as there are no breaks for commercials. I’ve been able to find out very little else about this rare series.

The theme music is Paul Dukas’ ‘The Sorcerer’s Apprentice’ by the way if you haven’t heard the episode…
The Black Hood
1943 15 minute Mutual Network Radio Program. Author Unknown.
Based on the MLJ Comic and Magazine Character.

Kip Burland/The Black Hood
Barbara Sutton
Sergeant McGinty
Gunman
Womba
Old Man
SFX: GONG Hit
ANNCR: The Black Hood!
SFX: GONG Hit.
ANNCR: Criminals beware… The Black Hood is everywhere!
SFX: Weird TONE UP and UNDER
HOOD: (filter) I, the Black Hood do solemnly swear that neither threat, nor bribe, nor bullet, nor death itself — will keep me from fulfilling my vow: To erase crime from the face of the earth!
SFX: Tone UP AND OUT
SFX: GONG HIT
MUSIC: The Sorcerer’s Apprentice, by Paul Dukas. UP AND FADE OUT UNDER ANNCR.
ANNCR: The Black Hood, who is really patrolman Kip Burland, a fact known only to newspaperwoman Barbara Sutton, has just been talking to Barbara on the phone. They were discussing the old Miracle Man and his strange housekeeper Womba. Sergeant McGinty, Patrolman Burland’s superior had thought their visit to the Voodoo doctor merely routine. But Kip Burland and Barbara Sutton were fascinated by the black magic of the Old Miracle Man. In fact, the old man had given Barbara an odd emerald ring in a twined serpent setting. Womba, the old housekeeper had objected to the gift. We find the telephone conversation between Burland and Barbara Sutton has been interrupted by a stranger at Barbara’s door — Burland is holding the line.
BARBARA: (Screams) What are you doing here with a gun? You can’t come in!
GUNMAN: Oh, I can’t –eh? Well, I’m coming in, and no one’s going to stop me, either! Not till I get what I came for.
KIP: (filter) Barbara, are you alright?
GUNMAN: There’s no one around. I checked and made sure the doorman was out…
KIP: (filter) Barbara!
GUNMAN: I came in and walked up the stairs…

ANNCR: And so Womba insisted that Sergeant McGinty pay some attention to her African pottery — crashing the heavy vase on his head. Down goes the good Sergeant! Womba has made good her claim that no one goes into the private chamber of the Miracle Man without an appointment. Now, what will she do with the unconscious McGinty? And what about the Black Hood? Has he been able to discover anything more about the emerald ring and its strange powder? If Womba intends to harm McGinty, can the Black Hood and Barbara arrive in time to save him? Be sure to listen tomorrow for more thrilling adventures of THE BLACK HOOD! (pause) The Black Hood is a copyright feature of the MLJ Magazine Group and is broadcast over most of these stations Monday through Friday at 5:15 p.m.
MUSIC: UP AND OUT
ANNCR: This is MUTAL. 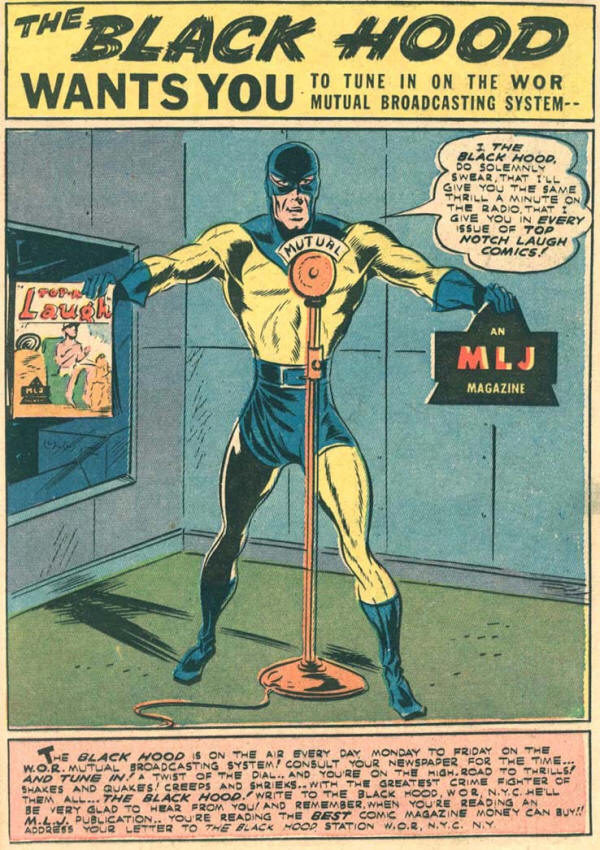