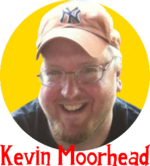 I discovered Kevin Moorhead’s cover collection of MLJ Charters mashed up with the Avengers. Then I noticed he had a series of Mighty Crusader comics covers that continue with plots that continue from where Archie stopped publishing them. They ware beautiful covers and you couldn’t miss Kevin’s enthuisiam for these heroes. Kevin was nice enough to sit down with us and fill us in on his fandom as well as how and why he collects commissioned art.

Shied G-Man Club: How old were you when you discovered comics?

Kevin Moorhead: I’m not 100% sure. I remember my aunt buying me some comics when I was “young” at the local meat market. And I know I came across some Whitman DC reprints back in the day too. I definitely remember being at the Giant, the big local grocery chain, and thumbing through the copy of Ghost Rider 27 they had on the stands. That come out in Dec of 1977. 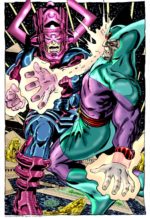 Kevin: I would guess it’d be the visceral nature of comics. The colors, the Kirby inspired action art, the cowboys as superheroes aspect and then you throw in the cosmic stuff Marvel had. Byrne’s Galactus vs the Sphinx has had a lasting impression on me.

Kevin: Not actively. They were fine with letting me “find my own way”.

Kevin: In the 80s. I went to our local comic shop, Fat Cats, and right there on the shelf with Avengers and Justice League was the Mighty Crusaders #1. In retrospect I remember reading about some of them in Jeff Rovins Encyclopedia of Super-Heroes but my first conscious memory was that trip to the comic shop. 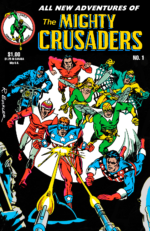 Kevin: At first it was newness of it. Finding something that I’d never heard of before that looked really cool. Buckler’s art was great on the series. The little geeky bits like the half page origin pieces in the back and the preview of Mister Midnight. As the song goes, “a whole new world …”

Kevin: That’s a hard one. I doubt I had one back in the 80s. They were more an amorphous blob of a group. Also, only the first 3, maybe 4, issues came out where I lived. So I only had a limited bit of exposure. None of the other titles made it to my neck of the woods either so it was very limited. Now, when I look at MLJ world I’d have to say the Lancelot Strong Shield because of my love of almost all things Kirby.

SGMC: When did you start collecting commissions?

Kevin: It was about 2008. I’d had blank walls in the apartment for a number of years and nothing I ever saw really made me want to hang it. No sunsets, no waterfalls, no space scapes or posters. I just didn’t see anything that I’d want on my walls. Then I realized I could get someone like John Byrne or George Perez to drawing something just for me lead me. At that point I knew what I wanted on my walls.

SGMC: How do you choose an artist for a commission? 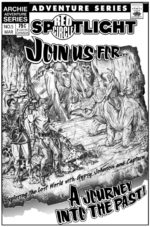 Kevin: I see it as a two stage thing. First, is the idea important enough for me to go to higher priced artists or is it more something I like but could live with a lesser known artist doing the work. Then it’s the matter of trying to find the right style. Anthony Summey’s cover to Red Circle Spotlight #5 is a good example. Summey’s work comes out of that old school adventure serial world so I thought he’d be the right choice to give me an Indiana Jones style cover. And I think he did a great job with it.

SGMC: How do you get in touch with the artist you want?

Kevin: oh, it’s changed so much. Social media wasn’t what it is today and so back in 2008(ish) when I started it often was a matter of going on some kind of digital expedition to find folks. I’d get excited just finding and e-mail address on some random page that let me get in touch with someone. Later on CAF, deviantArt and then facebook made things a lot easier.

SGMC: Most of your commissions are crossovers or imaginary covers, how do you choose? 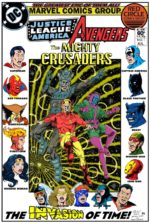 Kevin: Personally, I’m just not really interested in getting an artist drawing a single, specific character. To me it’s that I have that already in the comics. The commissions grew out of wanting something more “unique”. Mixing up characters from different genres or companies made the commission worth it to me. That developed into an outlet for my failed comic book writerness

SGMC: Are you trying to tell a story or storyline with the cover?

Kevin: Not really. Or, at least, not really when it comes to the Crusaders. I knew going in I would take the time to write up the issue blurbs so there wasn’t a sense that I had to capture the entire issue’s plot.

SGMC: The Mighty Crusaders have a lot of uniform variation in each hero. What elements are important to you? 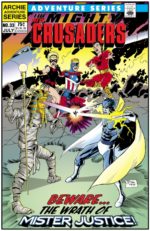 Kevin: My honest answer would probably to say not much is important. I didn’t want to just rehash things with the continuing cover series but instead to continue the stories right from where things left off in the 80s. Just as if I were the line editor back then. And that meant developing the characters and that leads to change. To the line up and to the look. So while the Shield’s trunks were more for me about an easy way to differentiate the golden age Shield from the 60s version I had no problem changing the Comet’s costume. In that case it was nabbing the look from the late 80s promotional piece Archie did.

SGMC: You have hundreds of pieces of original art, what do you do with all of them?

Kevin: Some are permanently on the walls (the John Byrne Doom Patrol piece) while others I swap out everyone once and a while. I don’t really have much else on the walls save a calendar or two so this is the main form of decoration I have. 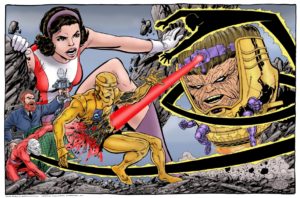 SGMC: When did you decide to share them on comicartfans.com?

Kevin: It was … end of 2008. That was really the only real site, that I knew of, that was geared really for fans to show off their stuff.

SGMC: How do you decide on a character for that artist?

Kevin: It’s more the opposite. Coming up with the combination or plot idea for an issue and then thinking about who could best capture the feel for it.

SGMC: When you are doing a series of covers, like the Mighty Crusaders cover run, do you like to stick to the same artist throughout the run? 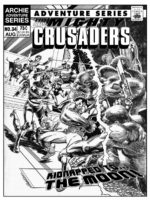 Kevin: At first I did. I wasn’t really thinking long term. I had a set of stories/issues in mind and was able to work out a bulk deal price with the artists I had in mind. Once I decided to do these as an ongoing thing I went looking for artists based on their style. Looking to match their work with the tone of the story. Andy Fish doing the art for the cover about a haunted castle is a perfect example.

SGMC: You have one artist pencil, another ink, and a third color. How do you choose each of them?

Kevin: It depends. Often times it’s simply a given that the artist will ink their own work. Getting someone else to ink the pencils isn’t something I plan for. When it comes to coloring while I went looking for various colorists early on at this point I’ve found that Chris Ivy gives me what I want every time and can do the lettering work too. So I tend to do most of that work through him these days.

SGMC: What is the price range for each of these categories if you don’t mind sharing? 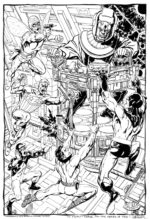 Kevin: I would respectfully pass on talking dollars beyond saying that I have been very lucky, almost blessed, to have had the kind of job that allowed me to have the extra money to be involved in commissions. But it certainly depends on what I have in mind. John Byrne was expensive but worth it. Though I would never have gone to him to draw the Super-Adaptoid vs. Amazo I have. How much I’m willing to spend depends on the subject.

SGMC: How much of the final version is your vision and how much is the artist’s inspiration?

Kevin: It varies. If I feel that I know what I want I don’t think it bad, or wrong, to ask the artist for something that specific. It’s certainly okay for them to just say no. Often I’ll offer some kind of layout idea and they’ll run with it from there.

SGMC: What advice can you give someone interested in starting to collect commissions? 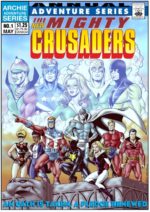 Kevin: At this point the number one thing I can say is take the time to look into the artist you’re thinking of commissioning. I’ve been lucky in that I’ve had very few bad experiences but those that were were bad. Some artists have been amazing to work with (Mitch Ballard) while others involved me contacting a lawyer (Anthony Castrillo). Making sure that the person will deliver ought to be the starting point. Not the most exciting part of the process but it’s important.

Also, take some time to think about who you want to approach.  Not everything needs to be drawn by George Perez, Alan Davis or Ivan Reis.  And if you know exactly what you want then I’d say be honest with the artist about it.  Do it respectfully, certainly.  Though some of the pieces I have that are the least favorite are so because they didn’t draw what I had in mind.