JAY PISCOPO TALKS ABOUT HIS COMICS AND GOLDEN AGE HEROES 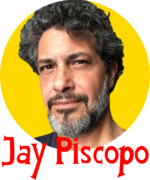 I have known Jay Piscopo forever, I am not sure what project he was promoting when we first met but we share a love of Golden Age Comics and the MLJ Heroes. Jay was nice enough to share his thought on his time in comics and the Mighty Crusaders with us.

Jay Piscopo: I think I was around 4 my uncle gave me some Skywald comics and my mother promptly, and justifiably took them away a week later. They did make their mark, in lots of ways, while I admire the work as an adult- The experience helped me solidify the belief that kids should not be exposed to anything with horror or conflict before age 6. By 5- my dad took me to the barber, in the stack of magazines, were a stack of coverless Adam Strange comics the story of Adam and Alannah and their adventures, really took hold of my imagination and became the template for a lot of what I create and enjoy now. Regardless of market pressures, I do believe an “all-ages” or “general audience” approach, similar to the silver age of comics is a good long game for creators. 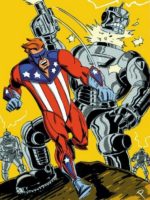 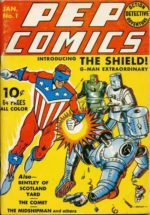 SGMC: When did you start drawing comics?

Jay: Been drawing all my life. My first professional gig was the Scrap City Pack Rats for Goodwill Industries in the 90s

SGMC: Where did you go to art school?

Jay: Dropped out of The Museum School in Boston

SGMC: What was your first comic con portfolio review like?

Jay: Usually horrible, but I learned

SGMC: How did you develop your style? 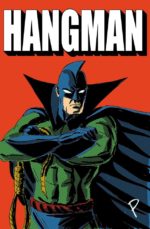 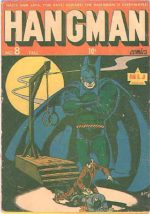 Jay: I do what I like and ignore what I don’t, always improving, never settling

SGMC: What attracted you to self-publishing?

Jay: Loved the Shield and crew from Steranko History of comics in high school. An Archie digest comic with reprints really turned me on and made me delve deeper.

SGMC: What attracts you to the Crusaders?

Jay: Unused potential as an alternative to the other multiverses, like public domain characters in general 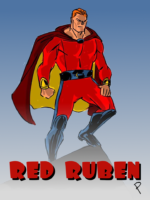 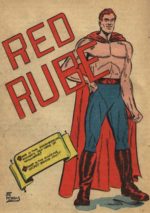 SGMC: Which is your favorite era of these characters?

Jay: Hard to say, I love The Comet’s arc, see what I did there? Golden Age Hangman, Silver Age Gray Morrow Black Hood, it varies

SGMC: How do you feel about the quirkiness of the 60s versus the traditional approach of the 80s?

Jay: It had its place, love the art

SGMC: You have developed your own versions of the characters, how do you decide what to keep and what to change? 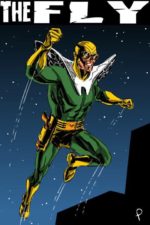 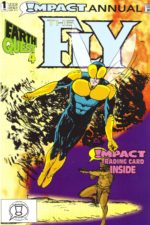 Jay: Creativity with the obstacle of liability. Parody, pastiche, and homage are difficult lines to walk, it usually sums up to nostalgia and the fan will make the last decision. So, beyond being sued by the original trademark holder, I do whatever pleases me and see what sticks

SGMC: In your opinion what are the elements needed for a good story?

Jay: The stories I like to experience and tell, usually will find opportunities to show the epic in the ordinary and the ordinary in the epic, As one example, The Man Who Shot Liberty Valance works on this level and insists the viewer make up their own mind whether it is better to “print the legend” Any story that moves people to listen to their better angels and find hope is an accomplishment, In a lot of today’s storytelling, I see the audience bringing these sentiments more than the filmmakers and mainstream comic creators. A good story must have a balance between all elements, otherwise, it becomes just a shrill vehicle for an agenda. The hard part is to give people what they want while proving its what they need. Dickens could do that. As for my own needs, it’s simple, like a pulp outline, exotic locales, unbelievable mystery weapon, seductive villains, heroic heroes and heroines, a few laughs, a lot of thrills and underlying message not to take crap from anybody unless you deserve it 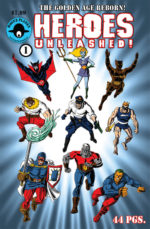 SGMC: How have you incorporated the Crusaders into your work?

Jay: I’ve put a couple in cameos, I’ve got a complete overhaul of the characters that I’d like to sneak in somewhere. Just started Heroes Unleashed! on Indyplanet- maybe there!

SGMC: Where can fans find these comics?

SGMC: You also do a variety of pieces for the uber-geeky fans like myself, from paper airplanes, digital prints, commissioned sketches and full color art. What can people get and how much does it cost? 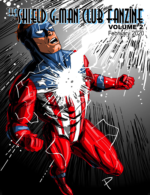 SGMC: What advice can you give a young artist just starting out who wants to break into comics?

Jay: Don’t. Just Don’t The competition is too fierce. Seriously and not so seriously, It’s such a wide-open game now, with so many possibilities to get your work out there, so, just do it, to steal a phrase. When it comes to storytelling in general, I think it’s always good to ask yourself hard questions. Why should my story exist? Do I possess the skills to tell it? How can I reach an audience?