Home » Mighty Crusaders » WHO'S WHO » You are reading » 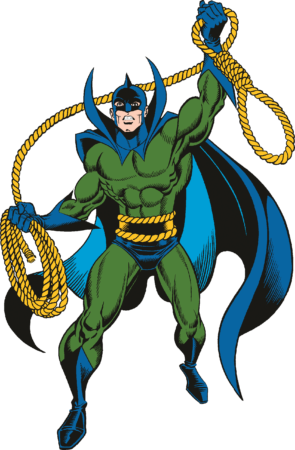 The Hangman is not a member of the Mighty Crusaders.

Robert “Bob” Dickering adopted the secret identity of the Hangman to avenge the Death of his brother the Comet.

When Robert Dickering decided to visit his brother John shortly after he graduated with a Master’s degree, he didn’t know at the time that this act would change his life forever. When he entered John’s apartment, he found John Dickering changing from the costume of the Comet to his street clothes and learned that his brother John was the super-powered vigilante known as the Comet. John then introduced Bob to his girlfriend, newspaper reporter Thelma Gordon and asked Bob to squire her around town while he caught up on lab work. An argument over Thelma led to Bob storming out of the apartment, only to be waylaid by two gangsters working for racketeer Big Boy Malone mistaking him for John Dickering, who was to testify against one of Malone’s cohorts.

John Dickering saw his brother being taken captive and quickly went into action as the Comet. Pursuing the car, the Comet disintegrated one of tires with his “disolvo-vision” causing the vehicle to crash. As Bob Dickering emerged from the car to flee only to be shot at by Malone’s men. The Comet then swooped down tried to shield his brother by taking the gunfire intended for Bob. As several policemen got involved in what quickly turned into a shootout, the younger Dickering quickly rushed his dying brother to his apartment via a fire escape during the confusion. With his brother Bob and Thelma Gordon at his side, John Dickering a-k-a the Comet died of his injuries. Not before telling Bob and Thelma to stay together as a memorial to him. But Bob, remembering his brother’s sacrifice made this vow:

“I’ll carry on for him, Thel! I’ll bring his murderers to the hangman! I’LL BE THEIR HANGMAN!” (Pep Comics #17)

Remembering that criminals were cowards at heart, he chose the image of an executioner to strike fear in the hearts of criminals. And to push this image forward, he chose to flash the image of a gallows and noose to herald his arrival. This projection became as much of a trademark as the green and dark blue costume Bob Dickering wore as the Hangman.

The Hangman began his mission of vengeance by kidnapping Malone’s associate Chugger as he was led out of the courthouse by Malone’s attorney. The Hangman sweated a confession out of Chugger by placing him in a dark room and projecting an image of the gallows to frighten him into confessing all he knew. He then went to Malone’s hideout and after a fight with Malone and his men, he left them in the hands of the police who had arrived after he telephoned them to be there. Malone was found guilty and was executed by hanging for his crimes. Thus began the career of the Hangman. (Pep Comics #17)

After that first case, the Hangman quickly established himself in the crime-busting field, but his career nearly came to a premature end just when it was beginning. A criminal known as the Jackal successfully framed the Hangman for a series of murders by hanging he committed while wearing a duplicate of the Hangman’s uniform. So successful was the frame-up that Thelma Gordon was convinced that the Hangman was becoming a ruthless killer vigilante like his brother the Comet (despite the fact that Bob Dickering consciously chose not to kill in his crime crusade). Fortunately, Thelma Gordon believed in him and gave him information about the real killer she learned from an African-American male who bore the unfortunate nickname of Anthracite. With that information, the Hangman broke out of jail and successfully apprehended the Jackal; getting him to confess to his crimes in the meantime (Pep #18).

The Jackal would eventually return to bedevil the Hangman on two more occasions. The first came after he faked his own death on the gallows and sought revenge against those who put him behind bars, including the Hangman. The Hangman was able to catch up to the Jackal just as he was trying to kill Thelma. During a climatic battle with the Hangman, the Jackal tried to escape via a rope only to have the rope catch around his neck inadvertently hanging himself (Pep #20). Surprisingly he survived that encounter with the rope breaking his fall. He sought refuge in a monetary where he used it as a base of operations to allow him to commit further crimes. During a final confrontation with the Hangman, he fled into the woods by the monetary and perished when he fell into a lye pit (Special Comics #1).

Gradually, the Hangman became that rarity in law-enforcement circles, a costumed vigilante whom law-enforcement officials actually approved of. This was due in large part to the fact that the Hangman chose consciously not to kill any of the criminals he encountered. This was in marked contrast to the homicidal activities of his brother, the Comet (who disintegrated many felons with blasts of his “disolvo-vision”). But the fact that the Hangman chose not to kill didn’t prevent many of the criminals that encountered him from inadvertently meeting premature (and often gruesome) demises. All which occurred either as the felons fought the Hangman or tried to escape from him. It was these incidents – coupled with his chosen image – that made the Hangman one of the most feared of the great “mystery-men” in the underworld.

In the Spring of 1942, the Hangman had his first encounter with his most frequent adversary, the Nazi terrorist/fifth columnist known as Captain Swastika. In their first encounter, the Hangman prevented him from killing the daughter of an imprisoned German official in order to prevent her from revealing vital information about his organization, the Legion of the Swastika, to the American authorities (Hangman #2). Captain Swastika (often assisted by his top henchman, Ice-Pick) returned to bedevil the Hangman on four other occasions over the course of that year.

In his second duel with the Hangman, Captain Swastika broke out hundreds of criminals from various jails across the country in an attempt to use them as a terrorist army to in effect, launch a second civil war in the United States (Pep #28). Later, he tried to hijack a newly launched battleship in order to deliver it to his Nazi masters (Pep#29). In his fourth duel, he teamed up with a Japanese axe-murderer called the Executioner in an attempt to lure their mutual foe – the Hangman – into a death duel (Hangman #3). On the fifth and final occasion, Captain Swastika and his men tried to destroy Mexico’s vital oil fields in order to cripple the Allied cause. During the climatic battle with the Hangman, Captain Swastika met his untimely demise when he was inadvertely impailed with an icepick thrown by Ice-Pick in an effort to kill the Hangman (Pep #34).

Throughout his career, the Hangman fought against other equally impressive adversaries as well. Among them included such villians as the Walrus, the Missionary, the Hunter, Mother Goose, the Executioner, and the Snail among others. Some of them eventually went to the gallows for their crimes. While others inadvertley met untimely demises during their encounters with the Hangman.

The Hangman’s celebrated career as a crime fighter lasted until the end of World War II. Whatever became of him after the war remains in doubt and has fueled many rumors about him and his postwar life. Among those rumors include the one that stated that the Hangman briefly went on the wrong side of the law before going back into crime-fighting. Whatever the case may be, these rumors have only added to the legend of the dark knight known as the Hangman.

The Hangman as no superhuman powers, but is an Olympic level athlete, master of hand to hand combat. has superior deductive abilities, and psychological skills