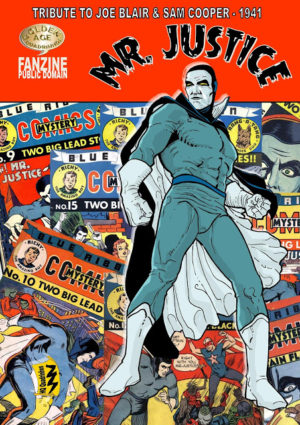 GOLDEN AGE QUADRINHOS FANZINE MAGAZINE #09
MR. JUSTICE – TRIBUTE TO JOE BLAIR & SAM COOPER – 1941
Mr. Justice, a character from the Golden Age (USA), published in the 1940s by MLJ (Archie) Comics, debuting in the magazine Blue Comics # 09 February 1941. The ghost was a creation of Joe Blair and Sam Cooper. Ghosts were common in the comics of the day, though they were more familiar in the horror genre and Mr. Justice was one more who would come to the mortal world to atone for their sins and reconcile themselves by doing good, but as a “superhero” and not a ghost any …
Mr. Justice, for a brief time, was the star of the MLJ, stealing the scene and becoming the main character of the publisher, highlighting all the covers until the edition of Blue Ribbon # 19, when the flagship Captain Flag happens to appear in the wave of patriotic heroes. The vast majority, almost all the scripts of the character, were written by Joe Blair and the phenomenal art of Sam Cooper. I also identified myself as a screenwriter – Ed Bresnick and as designers, Warren King and Jim Phillips. In the magazine JACKPOT, published in the winter, summer, autumn, and spring periods, in the last two adventures, we had the participation of other artists with traits that could not identify the authorship.
But who was this ghost? Well, this is an old story, literally … It had been before, around 1040 in England, Prince James, murdered by his countrymen and a castle on the Scottish border. But during the act, they tell the legends that the spirit of the prince was freed of its body, materializing and by revenge, strangled all its executioners. Still, in the sung legends, they say that its spirit dissolved in the stones of the castle, becoming a permanent part of the structure. Later, under the threat of World War II, the Solway Castle, considered a historic relic is dismantled stone by stone and sent to American soil on a freighter ship. However, already near the American coast, the ship is sunk by enemy submarines, depositing its precious cargo in the sea bottom. This act of war, however,
His freed spirit on American soil, still as a medieval horseman of cloak and sword, becomes tangible and suited to the ways of the time. He immediately embarks on an adventure and frees the “Prince James Spirit” at a given moment while his “new” mortal body falls asleep (apparently his mortal body is indestructible).
In releasing a young lady from a kidnapping, she calls him “Mr. Justice”, a name that the “ghost” begins to adopt also in its civil form. With powers beyond imagination (not much explained) another fighter of evil appears in American comics.
According to Brazilian researcher Jose Pinto de Queiroz Filho, an admirer of the comics of the Golden Age, a fan of Mr. Justice, the character had 16 stories published in Brazil from 1943 to 1947. There were 11 adventures in the Monthly Gibi in editions: 31A to 37A, 42A to 45A and 80A; 5 Adventures of the Monthly Youth Globe in editions: 45, 46, 60, 80 and 81 and in SHAZAM, an adventure in issue # 18.
We compiled all the adventures of the character considered public domain ( Blue Ribbon Comics # 09 to 19 / Jackpot Comics # 01-06 ), downloaded from the sensational Digital Comic Museum in a single compendium, for reading and research.
CLICK TO DOWNLOAD 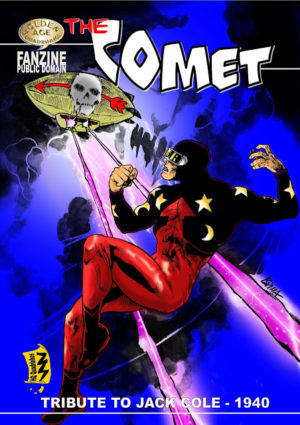 GOLDEN AGE QUADRINHOS FANZINE MAGAZINE #10
THE COMET – TRIBUTE TO JACK COLE – 1940
The Comet was an American Golden Age character, published by MLJ Comics – later Archie Comics, in the 40’s. Its creator was Jack Cole, creator of other characters also – Plastic Man among others as The Claw and Midnight.
The Comet was published in MLJ magazine, PEP Comics, in 17 consecutive numbers and never appeared on a cover, even though it was a sort of “crossover” of the magazine’s characters, always represented in a joint action on the cover. AMLJ Comics was well-known by its partners Morris Coyne, Louis Silberklein and John Goldwater.
The hero was a revolution to the ethical standards of the time, or by a lack of better evaluation, it would even be common to act outside these standards (?!) … The Comet killed! He was vindictive and bloodthirsty, just opening his visor and melting criminals (and even a cop). Without “seeing-nor-praquê” throwing from the top of the sky the poor thugs to crash down there … Damn! To block his vision of death he uses only one glass eyeglass with a display that lifts up and down. Interestingly, in this particular and very similar, two decades later came the Cyclops (X-Men) of Kirby and Stan Lee, as a “new” concept.
His flying powers and optical rays were the fruits of scientific experiment, a scientific fashion in those years. Young John Dickering injects a gas lighter than hydrogen into the veins (Whertham went crazy .. ahahah !!!) and so he could fly, over time, the side effects of the drug make him expel uncontrollable death rays that disintegrate everything which he observed. To bar the effect, ordinary glass. Ready! Thus came more superhero-The Comet.
Despite the short duration, the character has a unique story for the comics. It was, as far as I could research, the first superhero to die in American comics. The Comet cracked up with the gangster heavy bar called “Big Boy” Malone, who ended up murdering the hero, in issue # 17 (July 1941). The crime gave rise to another character called The Hangman, who was actually John’s brother Bob Dickering who witnessed every fateful scene. Malone’s thugs confused Bob with John and kidnapped him. The Comet / John goes to rescue him and in the action ends up murdered. Bob, full of hatred and thirsting for revenge, swears under his brother’s body to put an end to all the criminals of the city, arising The Hangman, here in Brazil – The Carrasco! For this, even, happens to date the girl of the brother, that thing!
One aspect that can not be denied about this unusual fact in comics was that at the time there was a legal fight against all who made characters “similar” to Superman and The Comet had a mortal vision and flew (that was enough), possibly this was the real reason the authors “killed” the hero.
Here in Brazil, in February 1942, Globo Juvenil Mensal # 16, published another story of COMETA, a case of sabotage in the Company Construtora ACME. At the end of the HQ, a call, as usual: “Another comet adventure in March.” And as promised, in the next issue of March 1942, there was the hero. Only the title of the story was: “Die Comet, The Avenger is Born!” The fans were astonished … A big coincidence is that The Comet ends the edition of PEP Comics # 17 and in Brazil, in Globo Juvenil Mensal # 17.
CLICK TO DOWNLOAD 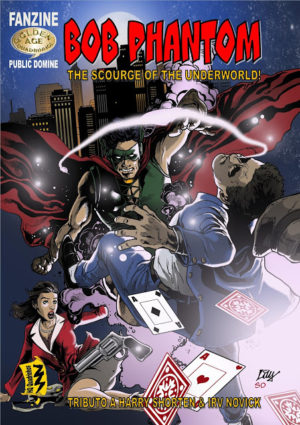 GOLDEN AGE QUADRINHOS FANZINE MAGAZINE #11
BOB PHANTOM, THE SCOURGE OF THE UNDERWORLD – TRIBUTE TO HARRY SHORTEN & IRVING NOVICK – 1930
Bob Phantom was a creation of Harry Shorten & Irv Novick, first published in the Blue Ribbon Comics # 2 magazine in December 1939, of MLJ Magazines. The character came out in issues # 02 and # 03 of Blue Ribbon Comics magazine (1939/1940) and then in the following editions # 03 to # 25 of Top Notch Comics (1940/1942) and “disappeared” …
Despite these 25 “appearances” in the MLJ magazines, it never appeared on any of its covers. Most screenplays, though unsigned, seem to suggest Harry Shorten and among the designers, along with Irving Novick, also had Gerry Thorpe, then Bernard Klein (incidentally Bobby King), Mort Meskin, Ramona Patenaude, and Warren King. Another writer also signed one of the scripts as Joe Blair.
This data was only possible thanks to the exceptional American site The Grand Comics Database (GCG), which has a very wide cross-pollination with all the comics of its collection, being one of my sources of research here and to inform the beginning of each HQ, in this project, technical data to about the only 25 stories published.
Before ending, it is worth saying that this decade and two later were very fertile in comics and that many characters languished and/or were even obscure, but with fantastic attributes that, mainly in the 60’s, were “reinvented” in others, such as if they were great news, just look at Pierce George Rice’s THOR, Cole’s Comet and Plastic Man, as well as even the forgotten Frankstein, become novelties in the powers of Marvel’s THOR in the eyes of the Cyclops in the elasticity of Mister Fantastic and the strength of the Hulk … We have a great admiration for comics, this fantastical playful way of seeing an improbable future, populated by supermen who “would one day come to redeem us,” a cycle of human hope, contained in the singleness of ” lies, “from legends, comics and always, a vain hope of winning! Who knows, one day, at BAMFS!
I hope you enjoy the collection, which is nothing more than a compilation in order to preserve a memory and demean a discussion. Good reading!
CLICK TO DOWNLOAD