The Mighty Crusaders: The Lost Crusade

This is the Message Board for the Mighty Crusaders Network!

The Mighty Crusaders: The Lost Crusade

The Mighty Crusaders return in an all new lost tale, featuring a stellar cast of talent. With The New Crusaders facing an uncertain future and the truth about their parents slowly being revealed, one man searches for answers. But will the answers he finds be worth reliving the pain of his own past? 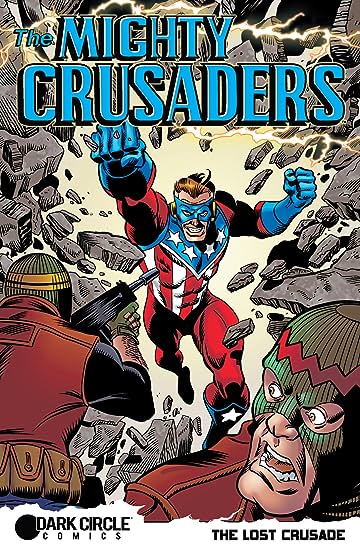 I wish this and Dark Tomorrow were available in print. [sad face]
Discovering new superhero worlds through the MLJ/Mighty Crusaders legacy...
Top

leonmallett wrote:I wish this and Dark Tomorrow were available in print. [sad face]

I'm, of course, with you-- leon.!!
Geeesh.!! With all of the talent they signed up to do this in digital... I would think they would give a Mighty Crusaders book a try.
I can't mention everybody but Chuck Dixon or Ian Flynn, or almost any of those writers would be great.
Ron Frenz used to be one of my favorite artists... and I would think that hiring him would make the book work. Frenz could give the book a mild "Kirby-feel" in the "exciting look" department. ...And Maybe if they would get Alex Ross to do an Initial cover or two... and have someone like John Byrne to do the art... for a first issue or two... with Ian Flynn or Chuck Dixon doing the writing... ...And a line-up consisting of most of the characters above:
At least the line up could include: The Shield, The Wizard, Black Hood, Steel Sterling,... maybe The Comet... and maybe a new female member.

I'll say it again: Given the right writer and artist... a Mighty Crusaders book could work!!
Top

My assessment of THE MIGHTY CRUSADERS ... digital.

I really liked ChrisCross's artwork. Especially that first panel of the second page. That panel had appeared in Comic Shop News and I colored the heck out of it. It was a GREAT panel of Steel Sterling, Black Hood, The Comet, and The Hangman pounding the crap out of a bunch of villains. If someone can draw a panel like that, -- then there's hope for THE MIGHTY CRUSADERS!! I think his art is really great on the Crusaders. I'd love it if he did a lot of issues.
I didn't care very much for parts of the story-- but I can live with it.!! (I guess.)

Great to see 4-Stars on The Shield's chest. Remember, each star stands for something.
Good artwork by Ron Frenz... but I expected as much.

I didn't care for the last Shield story. I don't think it's time for a 'new generation'...
... It's TIME these MLJ heroes had a chance to reach their real potential--- with quality writing and art.

Sorry, but don't get your hopes up. The Captain believes this story arc was commissioned a few years ago; perhaps around the time when "NEW CRUSADERS: RISE OF THE HEROES" & "NEW CRUSADERS: LEGACY" were being published. It may have been sitting on the shelf until now; assuming it's cheaper (& less risk) to digitize & sell online than print hard copies & distribute.
Top

Captain Sprocket wrote:Sorry, but don't get your hopes up. The Captain believes this story arc was commissioned a few years ago; perhaps around the time when "NEW CRUSADERS: RISE OF THE HEROES" & "NEW CRUSADERS: LEGACY" were being published. It may have been sitting on the shelf until now; assuming it's cheaper (& less risk) to digitize & sell online than print hard copies & distribute.

"They" have never really given these MLJ heroes a REAL chance... because they don't give them good writers or good artists.
I think these heroes have GREAT potential ... Archie just won't do them 'right'.!! Damn.

The culture is awash in Super-Heroes... and Archie/Red Circle will not give them a chance to really succeed.!!
Movies... T.V. .....comic books.... geeesh!!

Oh, and by the way-- I'm still looking for this book: Any help would be greatly appreciated.!!
Geeesh. Does anyone ever come here and read these or has Archie killed off all fan enthusiasm.??
Top

Is that panel from AWM? It looks a little like that kind of art style.

I will have to check.
Discovering new superhero worlds through the MLJ/Mighty Crusaders legacy...
Top

YEAH, it looks like a team-up of The Shield, The Wizard, Steel Sterling, one I can't quite i.d.... maybe Blackjack??... and Archie and Jughead as teen side-kicks. (Which I had hoped they would do. See: Kirby's Boy-side-kicks throughout his comic career.)

I'm not sure what you referred to, leon, ... as "AWM". Sure would appreciate your help in identifying the source.

The MLJ Companion comes out in August. It's now only February 24th. THE MLJ COMPANION documents the complete history of Archie Comics’ super-hero characters known as the “Mighty Crusaders”—The Shield, Black Hood, Steel Sterling, Hangman, Mr. Justice, The Fly, and many others. It features in-depth examinations of each era of the characters’ extensive history: The Golden Age (beginning with the Shield, the first patriotic super-hero, who pre-dated Captain America by a full year), the Silver Age (spotlighting those offbeat, campy Mighty Comics issues, and The Fly and Jaguar), the Bronze Age (with the Red Circle line, and the !mpact imprint published by DC Comics), up to the Modern Age, with its Dark Circle imprint (featuring such fan-favorites series as “The Fox” by Mark Waid and Dean Haspiel). Plus: Learn what “MLJ” stands for! Uncover such rarities as the Mighty Crusaders board game, and the Shadow’s short-lived career as a spandex-clad superhero! Discover the ill-fated Spectrum line of comics, that was abruptly halted due to its violent content! See where the super-heroes crossed over into Archie, Betty, and Veronica’s world! And read interviews with Irv Novick, Dick Ayers, Rich Buckler, Bill DuBay, Steve Englehart, Jim Valentino, Jimmy Palmiotti, Kelly Jones, Michael Uslan, and others who chronicled the Mighty Crusaders’ exploits from the 1940s to today! By Rik Offenberger and Paul Castiglia, with a cover by Irv Novick and Joe Rubinstein. INCLUDES 64 FULL-COLOR PAGES OF KEY MLJ STORIES!

I've given up on Archie ever doing the MLJ heroes right. I've been a fan since '65 and all my cajoling has not brought The MLJ heroes a decent book. (With the exception of Buckler's first issue of The Mighty Crusaders in 1983.

And I enjoyed "The End of Innocence" by Delsante and ChrisCross. I thought that had real 'possibilities.' Really decent art and story. If only....

Mark Waid has blocked me. ?? For reasons I can scarcely guess... I was hoping he would write an adventure or two of the MLJ heroes... just in time for the release of The MLJ COMPANION but I'm blocked.--- so, I've 'mined' every area I thought possible.

Archie's attempt to do the heroes in this 'dark' manner is the 'last nail'.!!

I was hoping for a book with Mark Waid writing and ChrisCross doing the art.
Maybe only a 40-page story to re-introduce these heroes to today's audience. LOL!!
Top

I need to check if that panel is from either of those appearances.
Discovering new superhero worlds through the MLJ/Mighty Crusaders legacy...
Top

Thanks for the heads up about the MLJ Companion.
Discovering new superhero worlds through the MLJ/Mighty Crusaders legacy...
Top

I need to check if that panel is from either of those appearances.

I dug through my collection and found AWM. Thanks, to you....leon.

I still wished some editor at Archie would get Roy Thomas and Jerry Ordway to do THE MIGHTY CRUSADERS.
I think they would do it. They only have to be asked. Geeesh.!!

Hire me to make the phone call ... and I'll do it. Make me assistant editor and I'd help plot and write the first arc.
(Desperation is seizing me, -- can you tell.?)

Here's the line up of the first issue: The Shield, The Wizard (who would renew their old friendship), The Black Hood, The Fly (I talked with Jim Simon and he would let Archie use Thomas Troy, his A-E... and the Spider ), and Fly Girl.

Those five would 're-start' the Mighty Crusaders... and The Spider, of course, is the villain that brings them back together. Ordway could capture the look of the Crusaders well, ... and Roy is an 'old hand' at Golden Age heroes.!!


Archie Comics Registers Trademark For Mighty Crusaders – What Do They Have Planned?
Posted by Rich Johnston June 30, 2017 12 Comments

22
I do try to keep an eye on trademark registrations by comic book companies in the run up to San Diego Comic-Con. You can often ascertain possibilities to be officially announced at the show.

We’ve been looking at Archie Comics decision to register trademarks for Hangman and Madam Satan of late, both featuring characters recently published by Archie and maybe signalling solo comic book series. But the latest isn’t a comic that Archie have published for some time.

The Mighty Crusaders is the team book of the Archie “Red Circle” line of superheroes, initially drawn together by Jerry Siegel, Paul Reinman and Mike Sekowsky, in an attempt to replicate Marvel’s success with the Avengers and superhero characters with flaws, but making the characters very flawed indeed, more likely to bicker than save the day.

Initially made up of The Shield, The Fly (re-made as Fly-Man), The Black Hood, and The Comet, the Mighty Crusaders membership has changed over the years as the series was first revived in the eighties by Rich Buckler, then again by DC Comics written by Mark Waid and Brian Augustyn, and even inspired the first stirrings between Alan Moore and Dave Gibbons over what would become Watchmen.

The team would be revived again, brought into DC Comics continuity with Final Crisis, and then from Archie Comics again in 2012 as the New Crusaders, by Ian Flynn and Ben Bates, a more mature take on the characters. There were a few delays and schedule bumps, and the last issue, New Crusaders: Dark Tomorrow Special #1 was released in March 2015 under the Dark Circle Comics imprint.

But we haven’t seen new issues for two years.. is this trademark registration the sign of something to be announced very soon? Maybe we should watch those San Diego Comic-Con panel lineups with even more interest than usual.

Return to “MIGHTY CRUSADERS MESSAGE BOARD!”