Home » Uncategorized » You are reading »

FANZINE #6: How a Mighty Crusaders Movie Would Work 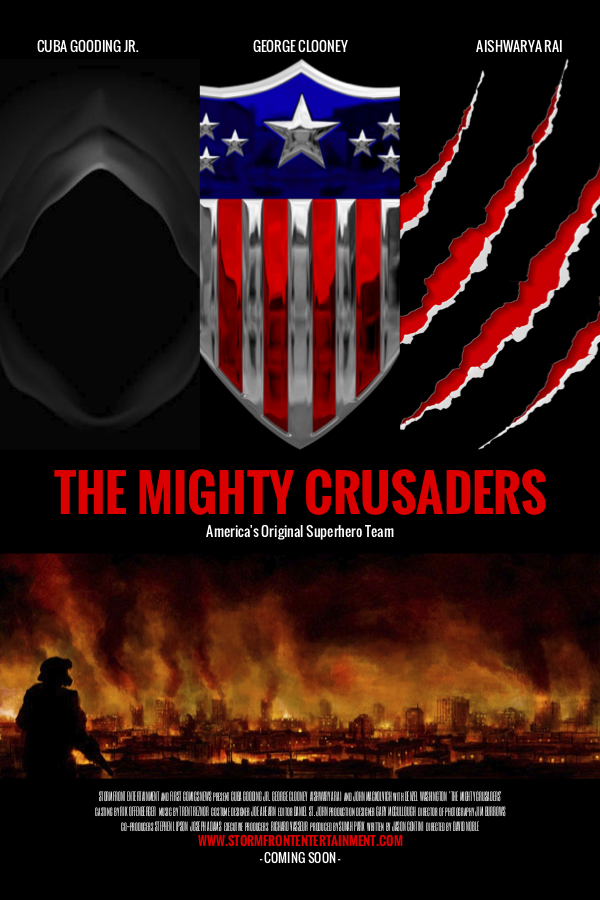 Article Cover designed by the author through Easymovieposter.com

As the Archie Comics universe reaches the end of its first decade in existence, its creative diversity has held touchpoints across many artistic mediums. Spanning from print, radio, and the small screen, the public at large has been exposed to the Mighty Crusaders. Unfortunately, one medium eludes these heroes- the big screen. Superhero movies have reached all-time highs, with many original movies earning Billions across the global box office. Marvel Comics, DC Comics Extended Universe (DCEU), and many larger independent film companies have contributed to the over 400 movies identified as “superhero” genres that currently exist.[1] The Mighty Crusaders have yet to enter this realm. Archie Comic Publication’s trepidation to attempt a motion picture may be reduced through the combination of compelling storylines, public attraction, and the appropriate production strategy, all resulting in a financial success.

An inaugural Mighty Crusaders movie could emulate the Marvel and DCEU patterns in building individual character movies that lead to a subsequent group project similar to The Avengers and Justice League. Professor Matthew Jockers, through case studies held at Washington State University, surmised there are six central fictional storylines.[2] The “Cinderella” storyline illustrates a character that has faced great hardships after initial success and eventually rises above adversity for a second wave of success. Fortunately for Archie Comics Publication, a Mighty Crusaders movie would not be the first time the company would produce a feature film. Unfortunately, Archie Comics’ previous endeavor, Josie and the Pussycats (2001), failed to recoup its original production budget, becoming a financial failure for the publication.[3] 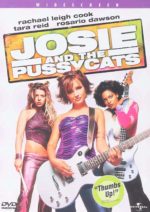 An initial movie storyline could focus on a single character, while allowing secondary characters to build around the central storyline. The Shield would be a strong central character to facilitate this story design. The Shield’s former glory, illustrated through historical vignettes, highlight his eventual irrelevance, as he disappears from the public eye. As shown by a photo of George Clooney and Shailene Woodley from the movie The Descendants, it is during this dark period that a young distant relative (Woodley), curious about the past, discovers The Shield’s (Clooney) true identity, and in the face of a grave disaster, encourages The Shield to rise and save the day. This resurrection inspires other heroes to join the greater good, setting the stage for a subsequent team project.

The characters that surround The Shield could emulate a combination of realism and imagination. Several of the potential character designs are present within the world of Cosplay. Proposed character design concepts that include The Jaguar as seen at DragonCon, The Comet as represented through the popular video game Fortnite’s Dark Voyager character, and The Black Hood as expressed through the DC Arrowverse character Vigilante, illustrate the character potentials for the big screen. These character examples highlight potential designs that can integrate easily into a Mighty Crusaders movie.

Figure 3 – Proposed character designs for The Jaguar, The Comet, and The Black Hood.

Many challenges will arise during the development of a Mighty Crusaders film. Most predominant will be the confusion in characters. Confusing The Shield with Captain America, or World Wrestling Entertainment’s stable The Shield may deflect Google searches. Also, confusion between the character The Fly with the Jeff Goldblum character of the same name, or even Spiderman, will amplify presumed character copying between a Mighty Crusaders film and those of the Marvel universe. Similarly, the introduction of The Cheetah in the DCEU film Wonder Woman 1984 will challenge the inclusion of The Jaguar should the female version be used for a Mighty Crusaders film. Another challenge that a feature film will contend with is in superhero saturation. Screenrant reported in 2019 that at least 10 blockbuster superhero movies were released.[6] The introduction of a Mighty Crusaders film, competing with both DCEU and Marvel films, may dilute the genre or face overwhelming competition with the two comic giants. Finally, the New York Times reported that many professionals in the film industry, to include acclaimed director Martin Scorsese, did not consider superhero films, specifically Marvel films, as “real cinema.”[7] Falling into this superhero stigma as a result of poor production quality, an inferior storyline, or bland characters threaten the potential of producing a Mighty Crusaders film. 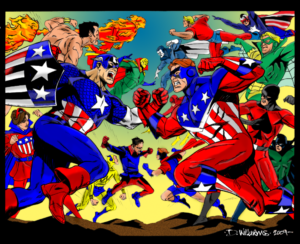 Figure 4 – A visual reflection of many comparisons between Marvel and MLJ Characters.[8]

Next, there are financial considerations. The cost of producing a quality action movie, let alone one based on superheroes, is a costly affair. A Marvel movie has reached over $250 Million to produce.[9] Fortunately, many movies of the genre recuperate their costs, well exceeding total earnings, allowing for sequels to the original film. There is the possibility to replicate strong storylines in the style of less expensive films to achieve a relatively successful endeavor. The movies Blade and Hellboy were produced at a fraction of the cost.  In these cases, the movies made a profit well over their $40 Million budgets.  Another alternative would be to avoid live-action altogether and seek production in the animation community. Both Marvel and DC Animated Universes have achieved further success with their animation films. Pixel Box estimates that a 90-minute animated film, with the right two-dimensional animation studio, could cost as low as three Million.[10] At a fraction of the cost, a Mighty Crusaders animated film may allow for successful character introductions to the general public. When facing financial challenges, a “showrunner,” or an individual who navigates a project through all of the development challenges is necessary. Michael Uslan, a producer involved in just about every DC movie and animated project over the last 20 years, would be an ideal candidate for this effort. Uslan is considered for not just his vast experience, but also the fact that he penned the foreword to the 2003 Red Circle trade paperback The Mighty Crusader: Origin of a super team.[11] This small contribution demonstrates his affinity and passion for the Crusaders.

While the challenges from producing a feature film may seem overwhelming, a proper strategy will mitigate many of the associated problems. A Mighty Crusaders film, centralized around one character, can replicate the $15 Million production costs that The Crow required.[12] Using a Star Wars-style sense of casting, where many of the main characters are relatively unknown mainstream actors, would reduce cast costs and shift such funds to production value and visual effects. Production outside staple locations to include Hollywood would allow for a more diverse series of site locations within the project. This would consist of lesser-known yet more affordable places to include the Czech Republic, Italy, and Mexico.[13] A diversity of locations will bring in varied global cultures and capitalize on new potential markets, and allows productions to leverage international tax incentives.

To avoid falling into redundant storyline traps, screenwriters should feel compelled to stray away from fan expectations in character development. The Shield’s behavior in a feature film, while strange based on comic history, may prove more relevant and relatable if the character is allowed to stray from traditional character norms. Secondly, one of the most recognized flaws of the DCEU was in the overly serious tone of many of the films, which turned many fans away to the more exciting departure of the Marvel universe. WhatCulture recognized this fact within their analysis of the Justice League film, referring to the movie as “joyless superhero slog,” repeating the failures of its predecessor Batman V Superman.[14] However, copying typical superhero tropes from explosions to big laughs should be an integral part of the film. Finally, introducing public audiences to as many easter eggs as possible has proven successful for many genre films. Both Marvel and DCEU movies include hidden easter egg treasures that diehard fans capture instantly, and that allows new viewers to expand their awareness of the universe. This trend is already incorporated into season four of Archie’s television series Riverdale, where the character Mad Dog dressed as The Shield.[15] 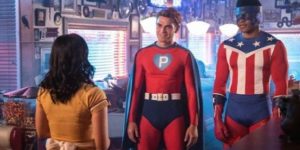 The final component for a successful Mighty Crusaders feature film would be in the marketing campaign. A strategy that targets superhero aficionados, international markets, and younger demographics will allow for a diverse community to enjoy the film. Film releases that do not compete against Marvel and DCEU opening weekends will provide exciting alternatives to moviegoers. Informational social media campaigns designed to educate, and separate comparisons between Archie characters and those from other comic universes will benefit the film. Additional integration into existing mediums, to include Archie television shows, websites, and through the use of social media celebrities, will further awareness on the project.

Archie Comics Publication, leaning on its ability to publish over two billion comics around the world in a dozen foreign languages, and produce a successful television show, have the foundational tools to dive into the world of movies.[17] With the right storyline, cast, locations, and marketing campaign, a Mighty Crusaders feature film would prove a lucrative and creative endeavor, and help Archie Comics enter their second century with a superpowered bang!

David Noble is an award-winning movie director with over ten years of experience in the independent film industry. He graduated from the University of Tampa with a degree in Communications. His films “Lost Padre Mine,” “Knight Squad,” and “Zydeco” can be seen on many internet streaming platforms to include Amazon Prime, AppleTV, and Vimeo. You can learn more about David Noble through his production company at www.stormfrontentertainment.com, or his listing on IMDB.

[12] Luke Owen, “The Tragic Story behind the Death of Brandon Lee on the Set of The Crow,” Flickering Myth, March 20, 2020, https://www.flickeringmyth.com/2020/03/the-tragic-story-behind-the-death-of-brandon-lee-on-the-set-of-the-crow/.

[15] Nicole Drum, “Riverdale: Who Are Pureheart the Powerful and The Shield?” ComicBook.com, October 30, 2019, https://comicbook.com/tv-shows/2019/10/30/riverdale-halloween-purheart-the-powerful-the-shield-archie-comi/.

THE BUTLER BRIGADE VS. THE MIGHTY CRUSADERS