DC is taking another crack at Archie’s Red Circle heroes this year andComics Buyer’s Guide #1658 looks at the project in this issue which starts with a cover by Cliff Richards.

Mr. Silver Age ties in to the cover feature this issue with his look at MLJ’s Silver Age revival of its heroes (see below).

Can’t wait to get your copy to see all that’s inside? We’ve posted several full articles from the issue at various places on CBGXtra! Check out the links below.

Also in this issue:

The CBG crew got back from Comic-Con International: San Diego with a day to spare to compose the first of two photo scrapbooks (the second will be inCBG #1659), which you’ll find early in this issue.

Michelle Nolan wraps up her look at Real Fact Comics.

Plus, we have plenty of reviews of comics, trade paperbacks, videos, and other comics-related materials!

All this and more, plus the largest and most complete monthly price guide in comics. 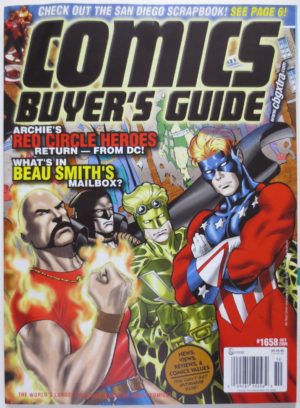 ASK MR. SILVERAGE
As promised in that article, here’s the sidebar on additional Golden Age MLJ characters who were revived in the Silver Age, specifically in Mighty Crusaders #4, and are just aching for their return to the spotlight:

The Ask Mr. Silver Age column in CBG #1558 details the variety of MLJ heroes who were revived during the Silver Age and went on to careers of at least a couple of appearances. Some experienced significant careers, while others had a cup of coffee or two.

On top of those players, the potential roster expanded considerably with Mighty Crusaders #4 (Apr 66), in which a number of heroes tried to join the team (unasked, I should point out).

All were based on Golden Age characters who had appeared primarily in Blue Ribbon (MLJ’s first comic), Top-Notch Comics and Zip Comics. The title, to give an indication of the issue’s approach, was “Too Many Super Heroes.” Although that may be a difficult concept to grasp, MC #4 may have achieved it.

While the story featured all of the characters who had appeared in other stories, it also included a number of Golden Age heroes who made just that one Silver Age appearance. That list comprises:

Black Jack: Another cop, this time Detective Jack Jones (no relation, I imagine, to John Jones, the Martian Manhunter), was captured by crooks who intended to kill him. But he escaped and vowed vengeance in the guise of Black Jack (because he liked to play blackjack with the cops in the station, don’t ask). He appeared in 16 issues of Zip Comics starting with #20 (Nov 41).

In MC #4, he hitched a ride in the Fox-Car along with The Web, Bob Phantom and The Fox to meet the Crusaders, but he didn’t bring much to the party.

Bob Phantom: Bob, as I call him, first appeared in Blue Ribbon Comics #2 (Dec 39) and #3 (Jan 40) and then moved to Top-Notch Comics #3 (Feb 40), where he stayed through issue #25 (Mar 42). Broadway theater columnist Walt Whitney never explained where he got his useful power or his all-time goofiest name. It’s probably better that way.

Likewise, Bob enjoyed his ride in the Fox-Car in MC #4, but didn’t add much to the action.

Captain Flag (and Yank the Eagle): Kidnapped by the dastardly villain Black Hand to coerce his father into revealing his invention’s secrets, drunken playboy Tom Townsend watched his father die rather than reveal his secrets. The son was saved by an eagle, which carried him back to its nest and nursed him back to health. In return, Tom made a costume out of the American flag the eagle brought to the nest one day and became Captain Flag. Hey, I don’t write ‘em, I just read ‘em. Cap appeared in seven issues of Blue Ribbon Comics beginning with #16 (Sep 41). With an origin like that, his short run isn’t too surprising.

Cap added to the red, white and blue cacophony by teaming with The Shield and Dusty in a longish slugfest against The Hangman in MC #4. This was Dusty’s first meeting with the new Shield, when he sensed that the new guy wasn’t his old partner.

Dusty: The only survivor of a plane that crashed due to sabotage, Dusty Simmons became the ward of Joe (The Shield) Higgins and became his crime-fighting partner. His story was told in Pep Comics #11 (Jan 41), and he appeared in most Shield stories (except for the first few Shield-Wizard issues). He also formed a partnership with The Wizard’s sidekick, Roy the Super Boy, and they appeared as the Boy Buddies in Hangman Comics #2-8 and Black Hood Comics #9-11.

Despite his guardian, The Shield’s substantial revival in the Silver Age, Dusty’s only appearance came in MC #4, where he realized the new Shield was not the old Shield. The Shield decided he would tell Dusty the story, but we never saw it.

The Fireball: While battling an arson fire, fireman Ted Tyler fell unconscious in a laboratory. He was coated with chemicals that were activated by the fire’s heat, giving him the ability to absorb and control fire. That made him handy as a fireman and even handier as The Fireball, who appeared in nine issues of Pep Comics starting with #12 (Feb 41) fighting evil arsonists.

Fireball was the first outsider to ask to join the team in MC #4, but he was quickly joined by Inferno and Firefly. They all tried out their fire powers on each other and then took to the sky to fight the Dragon. He tried to burn them up, but that trick never works on three fire-heroes, and it didn’t work here, either.

Firefly: Biochemist Harley Hudson gained the power to replicate the strength and leaping abilities of insects. He also figured out how to make himself glow like his namesake, a neat trick. He made 20 appearances in Top-Notch Comics starting with #8 (Sep 40).

Firefly tried to join the Crusaders in MC #4 and arrived just after Fireball asked to join. He leaped from the fire-guys’ saucer to attack The Dragon on his own and was accused of looking for glory rather than teamed-up justice. He was defeated, and The Dragon (aka Hangman) escaped.

The Miracle Man (aka Zambini, the Miracle Man): Zachary Zambini first appeared as The Miracle Man in Zip Comics #1 (Feb 40), a magical guy whose best gimmick was being able to repel any evil force and return it to its source. He had a healthy run through Zip #35 (Mar 43), mumbling arcane chants and clutching an amulet. You know the drill.

Zam argued it out with Kardak over which of them should join the Crusaders as the magical member in MC #4. The he teamed with Kardak to save the day.

The Mystic (later Kardak, the Mystic Magician): Your basic top-notch magician, The Mystic debuted in Top-Notch Comics #1 (Dec 39) and appeared there through #29.

After arguing with Zambini about which of them was the greater magician in MC #4, Kardak projected an image of evil-doing on the wall to indicate where the Crusaders were needed, and then teamed with Zambini to defeat The Wizard and Hangman with the help of our next guest.

Roy, the Super Boy: Nope, I didn’t make him up, he was the sidekick to The Wizard, a popular character who began in Top-Notch Comics. Following the usual pattern, orphan Roy Rossman was befriended by Blaine (The Wizard) Whitney and became his crime-fighting assistant starting in Top-Notch Comics #8 (Sep 40). He also teamed with the aforementioned Dusty as the Boy Buddies in their own series.

Roy returned as the Mighty-Boy (no doubt sensitive to copyright claims) and saved the day in MC #4. He used his magical powers to call upon the youthful Wizard from the past to help combat the older, evil Wizard. He in turn had been brought out of the past by Zambini and Kardak. When the villains were defeated, the young Wizard and Roy returned to the past.

Jaguar: The only hero to try out for the Mighty Crusaders without a Golden Age lineage, The Jaguar (aka famed zoologist Ralph Hardy) followed The Fly into The Silver Age beginning with Adventures of the Jaguar #1 (Sep 61), where he resided for 15 issues . He also landed 14 solo stories in Laugh and Pep during this time. Jag used a magical jaguar belt to communicate with animals and gain super-animal powers, although he mostly used flight, super-strength, and his telepathy.

Jag kept to himself for the most part, but he helped battle The Wizard in MC #4 for a few panels, and then returned in #5 as a member of The Terrific Three with Mr. Justice and Steel Sterling.