MLJ apparently didn’t really become prosperous until the Archie Gang began to dominate the small comic book producer’s titles in the mid-1940’s, or the company would not have been one of the first to dump superheroes. During 1940-44, though, MLJ produced a goodly number of the most highly sought-after and collectible comics of the Golden Age.

Those 1940-44 MLJ comics are among the priciest and most difficult to obtain of the Golden Age; they are almost always hot sellers on eBay and almost always sell for at least $100 even in “good.” Yet the nifty aspect of collecting MLJ is that you can obtain a highly representative collection with only about a dozen comics or so. 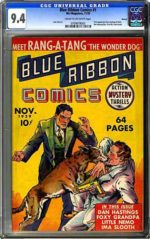 Blue Ribbon is the least known of the four titles, since it ran only 22 issues (Nov. 1939-March 1942). The title featured four superheroes – The Fox in #4-22, Mr. Justice in #9-22, Inferno in #13-22 and Captain Flag in #16-22. The Fox was something of a Batman knockoff; Mr. Justice was a supernatural hero who first appeared one year after DC’s The Spectre; and Captain Flag was one of the earliest patriotic heroes, first appearing in the Sept. 1941 issue. Captain Flag followed Captain America by only six months.

That makes Blue Ribbon an easy title to pinpoint – #16-22 are the issues to aim the hardest for unless you have unlimited funds. You get the gamut of Blue Ribbon. 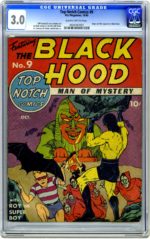 Once again, it’s not hard to pinpoint the issues to get: #9-27. The difference is that these are much more plentiful than Blue Ribbon #16-22, simply because the best part of the run ran 19 issues compared to 7.

Pep was the longest-running title with a superhero. The Shield, the original patriotic hero, appeared from #1 (Jan. 1940) through #65 (Jan. 1948). But you’ve got to look a lot harder at Pep than you do at Blue Ribbon or Top Notch.

The Comet – an original concept with blazing eyes – ran in #1-16, followed by his death in #17. It was in that issue that MLJ’s best period piece, The Hangman, took over in a unique story. The Comet became the first comic book superhero to die in that tale; The Hangman, his brother, succeeded him. Nifty concept.

Minor characters abound in Pep: The Press Guardian #1-11, Fireball #12-20 (a Human Torch knockoff), and Madam Satan #16-21. Captain Commando started in #30 and ran in most issues through #56. None of these are worth getting too excited over.

So your best bet is to get one issue of Pep #1-11, followed by another issue of Pep #16-20. If you can get #17, though, that’s a true prize. The most sought-after issue of Pep, of course, is #22 (Dec. 1941) with the first Archie story, but that is a spendy, spendy book, especially considering that the story has been reprinted several times. Veronica first appeared in #26, making all the difference in the world in the success of the series; Betty and Jughead were there from the start.

Just about any issue of Pep with Shield and Hangman stories (#17-47) is well worth acquiring. It’s one of the most underrated of all Golden Age comics, since you get early Archie and Co., along with Captain Commando. 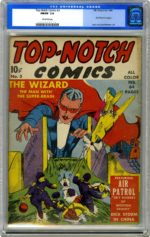 Zip Comics, with one of the best, with one of the best names to come out of the Golden Age, was the last monthly to debut, with #1 dated Feb. 1940. Steel Sterling ran throughout the series in #1-47, but the other early characters – Mr. Satan in #1-9 and Scarlet Avenger in #1-17 – are of interest only to completists. Still, one issue of #1-9 represents an energetic title.

Black Jack, which ran in #20-35, and the Web, which appeared in #27-38, were violent crimefighters in crime-oriented stories. So that makes Zip #27-35 the best of the bunch. As for the ridiculous Red Rube in #39-47 – forget it. Those nine issues are among the most overvalued comics in the Golden Age.

The MLJ heroes received a revival boost in The Mighty Crusaders and other Archie Series titles during the 1960’s, which contributed mightily to the scarcity of the Golden Age versions when fans became aware of them.